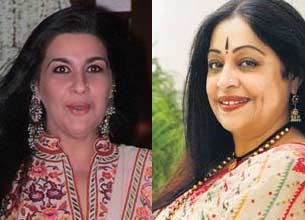 From Amrita Singh to Kirron Kher, on-screen mothers have dared to break the conventional mould.

Here's a list of films which presented moms in an unconventional way:

"Kal Ho Naa Ho": Lilette Dubey played a hip bohemian NRI mom named Jazz who competes with her overweight daughter Delnaaz Irani to get male attention. It was all done in the spirit of fun though.

"Devdas": Kirron Kher bustles around the house attending to leaky roofs and cracking finances, cracks jokes in front of her introverted husband and breaks into a dance at her affluent neighbour's get-together. This was a mom with a difference. This was a mom who wore the pants in the family.

"2 States": Amrita Singh in "2 States" plays a loud and opinionated woman. When her son introduces her to his future wife's parents, her remarks become embarrassing in their bigotry and prejudice. There is nothing demure about this on-screen mom. This is a woman who is not obliged to behave like a screen mom. She is outspoken in her biases, uncontrollable in her opinions. She is a mom without qualms.

"Aandhiyaan": When in 1990, Mumtaz decided to make a comeback, she played a hip single mother, singing songs and acting in a most un-motherly fashion with Prosenjit Chatterjee who played her son.

"Kaagaz Ki Nao": Way back in 1975, Helen played a single mother in this bold B.R. Ishara film. She dared to have a love life in the film. When daughter Sarika sees her mother having sex she cannot bear the humanization of the traditional mother-goddess figure. Sarika's character commits suicide.

"Bhavna": In the film directed by Vikram Bhatt's father Pravin Bhatt, the sari-clad morally inhibited mother turns into a stylish hooker in slit gowns and outlandish wigs to give her son a decent life after she is abandoned by her husband. One of Shabana Azmi's most powerful performances.

"Apnapan": Reena Roy's stellar performance as a mother who prefers a career to the role of a home-maker. Of course, the script makes her suffer and sob for her sin. But Reena's spirited performance imbued the mother-figure with flesh, blood and bite.

"Akele Hum Akele Tum": Manisha Koirala gives up her career to be a home-maker for Aamir Khan and their six-year-old son. But when boredom sets in, she leaves without the child. Shockingly unconventional, the film directed by Mansoor Khan, was inspired by "Kramer vs Kramer". The mom in the original, played by Meryl Streep, was denied custody of her child. In the Indian version, mom Manisha comes back home. All is forgiven.

"Listen... Amaya": A widowed Deepti Naval with a grown up daughter tells the latter that she wants to remarry. The daughter Swara Bhaskar's shock, revulsion and refusal to accept that her mother is entitled to a life beyond that of a mother is symptomatic of a society that deifies the mother figure at the cost of her personal happiness.

"Dil Chahta Hai": She is divorced, lonely and often drunk. And because of all of the above Dimple Kapadia is not allowed to meet her child by her husband. This was a real mother. She was allowed to be selfish and human. More power to director Farhan Akhtar.