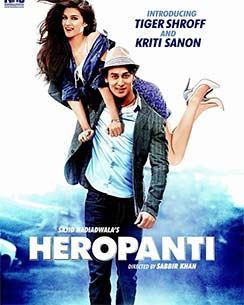 Tiger Shroff, who is ready to embark on his Bollywood journey with "Heropanti", says his father, actor Jackie Shroff was slated to make a guest appearance in the film.

"The makers were contemplating an idea to cast my dad in a guest appearnce, but somehow it was not going well with the screenplay, so we eventually cancelled it," Tiger told IANS.

However, had Jackie been in the film, it would have made Tiger nervous.

"I was very nervous to share screen space with my dad. But...we didn't get that chance in this film, unfortunately," he said.

The film's director, Sabbir Khan, said: "Everybody was asking me - 'Do we see Jackie dada in the film?' So we planned to rope him for a cameo, but it didn't work out. It didn't go well with the script."

Tiger says he is eagerly waiting to see the audience's reaction to the film, which is due for release May 23.

"I am extremely nervous and I am eagerly waiting to see the audience reaction. I hope the audience accepts me and enjoys the film," he said.