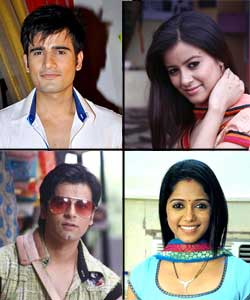 This week Yash Patnaik and Swapna Waghmare's Rang Badalti Odhani's on Star One will see its Maha Episode on Saturday (9th July). The episode will see a series of confusions and confessions, a combination of which will give away a romantic flavour to the show...

A source from the sets informs, "The show will see a beautiful song sequence which will be picturized on the song Na Jaane Mere…from the movie Dilwale Dulhaniya Le Jayenge or on Pehla Nasha... from the movie Jo Jeeta Wahi Sikander, where Simran (Garima Bhatnagar) will confess her love to Shaan (Karan Tacker) and Adi (Karan Godwan) will open up his heart in front of Khanak which will put Shaan and Khanak in a dilemma."

Elaborating more on the sequence, a source says, "At present, Shaan and Khanak's relation is going thro' a rough phase. But when they receive a call from Simran and Adi, they mistake it as a call to make up their relation. But eventually they will get a shock when they get the proposals from Adi and Simran respectively."

We contacted Yashashri Masurkar and she says, "Yes, even I have heard about a romantic song sequence which is going to take place. But the maha episode is something that the audience have to wait and watch."

Seems like hard times are knocking on the doors of Shaan and Khanak!

.sariminoz. 9 years ago yashu and both karan were looking awesome in maha episode hope they will come back soon
fingers crossed

WooHooHaha21 9 years ago Karan Tacker was looking smoking HOT in the black top in the montage! *Day dreams*

adeelakhokhar 9 years ago Dis track is superbly going... I am enjoying it sooo much... Rbo rocksss!