View Profile
Having a trail of modeling for more than fifty brands like Cadbury, Eureka Forbs, Sprite, Thumps Up, Clinic All Clear and likes, Nakul Mehta will soon be seen on big screen. Starting his filmy career with Kumar Mangat’s Haal-E-Dil, the bubbly boy Nakul is happy having no filmy background. Why and how? Let’s know it from Nakul Himself…

Q.: What about your character?
A.: I am playing the character named Shekhar. He is a 24 year guy with mischievous mind accompanied by a big mouth. All the girls love him. Till the time he falls for someone, he has no realization of real love. His life suddenly changes once he falls for a girl. He enters into absolute matured zone of life from his absolute frivolity.

Q.: How do you have the sense of responsibility in real life?
A.: I am very much responsible in my real life. I have seen much in my small yet packed life. I have experience of working in theater for three years. At the same time I worked in fields like share, marketing and IT. My father was in Navy. So I had seen the whole India with him. I personally believe that an actor must have every kind of e 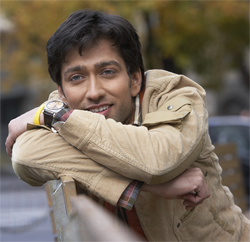 Q.: Was it easy for you to become an actor?
A.: Not at all. Whatever I have achieved are only through hard work and dedication. My father’s posting to Mumbai proved to be a boon to me. Once I reached Mumbai I started modeling for ads. After a while I joined Mujib Khan’s theater group ‘Idea’. After getting attached to theater I started getting offers for films, too. Slowly and steadily I continued getting closer to my destiny. In the mean time, apart from Mujib Khan, I worked for Om Katare in his group ‘Yatri’ and staged English drama for Joy Fernandez, too. In this way I just continued dragging myself up and now you can see me in front of you!

Q.: How did you bag Haal-E-Dil?
A.: Actually Kumar Mangatji watched me in an ad and calling me to his office he introduced me with Ajay Devgan. He told Ajay that he wants someone like me for his daughter to appear opposite in film. Then followed a four hour long audition in which I had to go through several tests.

Q.: Both Amita and Addhyan are new for audience but you are a known face. Will that help you in this film?
A.: If few people know me and if because of that they come to watch the film, it’ll surely be a profit for my film only. And if something proves better for my film then it’ll be good for me also. I don’t consider myself separate from my film.

Q.: While two actors share screen, audience expect much competitive drama from them. And this is first film for both of you. Competition between two actors must be higher…
A.: Truly speaking, we barely had chance to work together. I know very little about him. Still, I can say he is very good guy. It would be wrong thinking about competition after knowing someone for such a short period. It’s better to wish all the best for Addhyan.

Q.: How do you believe in competition?
A.: I believe in it. Many people are joining this industry everyday. But there are very few directors working here. So, only better actors will have chance to work with them.

Q.: As you have mentioned about new faces, then talk about them nah…
A.: For the time being I can see only three new faces. First being that of mine and the others are Amita and Addhyan.

Q.: Have you signed any other film?
A.: For the time being I have no more film in hand. I took so much time signing this film only. I will sign my second film only if I feel confident about affording eight to ten months from my life for that film. I don’t want to just sign films here; I have to build my career.