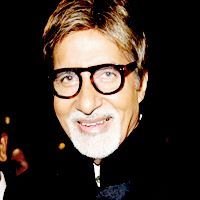 "Comedy Nights with Kapil", a popular TV show hosted and produced by comedian Kapil Sharma, is getting bigger every weekend. After a string of superstars appeared on the one-hour show, it is megastar Amitabh Bachchan's turn.

The 71-year-old will soon be seen on the comedy show to promote his forthcoming film "Bhoothnath Returns".

"Bhoothnath Returns" will hit the screens on April 11.

priti.raj 7 years ago superb tv show...full on comedy. i love to watch this comedy show.

+ 3
7 years ago I so wanted this to happen! So so happy! :D Not going to miss the episode :D So excited! Kudos to Kapil :* May this show keep growing like this :)

7 years ago CNWK is the best thing to have happened to comedy in India! Kapil is brilliant! :)

7 years ago Kudos to Kapil for putting on the best comedy show ever! Love it...waiting to see big b...

+ 2
7 years ago wow super excited...only aamir left in my fav list who dint appeared yet on ds shw.

+ 5
7 years ago loved the epi where salman came with sohail...it was so funny n salman couldn't stop laughing!