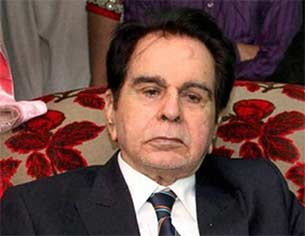 The stage glittered with the presence of Hindi cinema icons like Amitabh Bachchan, Dharmendra and Aamir Khan, when the trio, along with veteran actress Saira Banu and author Udaya Tara Nayar, launched thespian Dilip Kumar's long-awaited autobiography "The Substance and The Shadow" in his presence here Monday evening.

Legendary singer Lata Mangeshkar, who was slated to sing at the event, couldn't make it.

Held at Grand Hyatt in Santa Cruz here, the red carpet of the event saw celebrities from the old and gold age as well as new generation walk in for the momentous night.

Dilip Kumar's wife Saira Banu, who looked resplendent in a green sari, was overwhelmed to see the fraternity's participation in the event, which saw Karan Johar as a host. She hoped the book is appreciated.

Before the event, she said: "Please pray that the dedication we have written the book, it is received by the readers in the same way. Every chapter in the book is important and you all will read something that you have not read before about him."

His autobiography chronicles the 91-year-old's life from his days as a child to present - the ups and downs in his life, his family, career, wife and more, as told by him to Nayar, who is a close family friend.

Aamir, who recited a poem penned by Prasoon Joshi specifically for the occasion, said: "We all were eagerly waiting for this big day. I am a huge fan of Yusuf sahab and I was waiting to read his book and his experiences."

Actress Priyanka Chopra, who walked the red carpet, said she was "honoured" to be invited for the event.

"I'm so happy for them today. They have been close to my family for a long time. I have seen all his films and I really admire him," she said.

For Madhuri Dixit, who walked in with her husband Sriram Nene, it was a proud moment to be part of the event.

"Dilip Kumar is a legend in himself and it's a big day. He has been an inspiration for everybody," she said.

Lata Mangeshkar, who is close to Dilip Kumar's family, had given her consent to perform at the event, but if sources are to be believed, her ill health didn't allow her to be present.