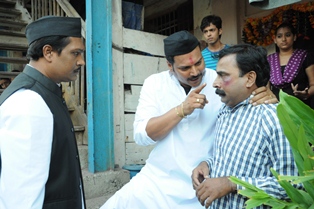 It was a very hilarious experience for CID cop Daya when he shot an episode in the chawls of Mumbai for the ongoing Mission Mumbai series.

Recently, Daya (Dayanand Shetty) and Abhijeet (Aditya Srivastava) visited the chawls of Parel to shoot for an upcoming episode which required them to be dressed as gundas. The premise required Daya to be beaten by the villain.

A little birdie from the sets informed that, during the shoot around 500 odd people had gathered to witness the sequence. Suddenly, in between the shot few children made their way through the crowd and charged towards the villain and started arguing with him. Unaware of the shoot in progress, these little fans of Daya thought their hero was getting beaten up in real and came forward to help him. After some convincing by the crew they understood the situation and were happy to know that their favorite hero is safe.

Now that's a fan following to be envy of!

INSTIGATOR 6 years ago So sweet..
Thanks for the article...

SofiyaSam 6 years ago Good morning every1.
Have a great day ahead. TC

ArnabDas 6 years ago i recently started watching CID ...jodi of abhijeet and daya is rocking..:)

DemonStar 6 years ago Ah, that's so sweet. Thanks for sharing!

SofiyaSam 6 years ago CID is the best among all crime show. And DUO r sweetest among all.

Veena.. 6 years ago Awe soo cute :)
Dayanand and aditya are the best heroes :)

.thanks a lot for sharing.

-beena- 6 years ago That's so cute.Thanks for sharing this sweet article Tellybuzz.

SofiyaSam 6 years ago Thanks for sharing the sweet article tellybuzz.

Hathras case: Kangana Ranaut says 'Have immense faith In UP ...
28 minutes ago

Akshay Mhatre talks about the importance of a mother's hand ...
3 hours ago
View More
TOP