BollyCurry returns this month to add another name to the limelight in the Child Star in the Spotlight feature. Distributing her share of cuteness amongst other Tinsel Town dwellers, here's presenting the princess-like-doll, Ruhanika Dhawan. 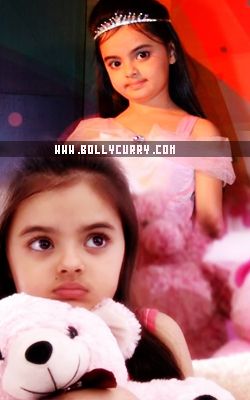 Ruhanika Dhawan was born in 2007, currently making her a sweet six year old. Having recently enter the world of acting and being of such a young age, very little can be said about her personal life besides how her adorableness has reduced the Bollywood film fraternity to gasping shocks of "aww".
Dhawan marked her Bollywood debut with the film Jai Ho, which released in January 2014. The film starred bigwigs such as Salman Khan, Tabu Hashmi and debutante Daisy Shah in lead roles. While her role consisted of only a scene or two, which subsequently resulted in a very short screen presence, it has not stopped from her being recognized and approached by fans. Debuting alongside a figure such as Mr. Khan also has it's perks who has often publicly cited how beautiful he found her to be.
As of now, Dhawan is more popularly known for the portrayal of her much-loved role as Ruhi Bhalla, the protagonist's daughter, in Ekta Kapoor's new show on Star Plus, Ye Hai Mohobbatein. Starring tellydom favorites, Karan Patel (Raman Bhalla) and Divyanka Tripathy (Ishita Bhalla) in the lead roles, she has received much adoration from the fans of the drama and look eagerly forward to seeing what this splendid youngster has to offer.
BollyCurry now signs off with the hope of future presences in movies by the talented actress as she continues to attract fans of all ages. Being just on the brink of her career, we wish Ruhanika Dhawan a rewarding life ahead and a very successful career.
Author: Khushi P.
Editor(s): Fariha L. and Jenifer Y.
Graphics: Shikha A. & Komal P.
Do you have a suggestion or comment for BollyCurry? Drop us a PM at BC_Dropbox today!
51 Likes

Kangana Ranaut Vs Anurag Kashyap: Actress ‘Steps Back’ after ...
44 minutes ago