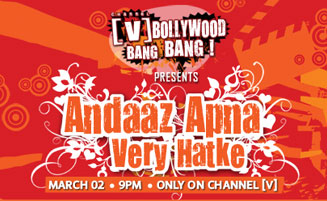 Featured Video
scripted, directed and produced by Channel [v]. All the viewers will be able to watch the fun and excitement that goes into a LIVE flick at 9 pm on Sunday March 2nd, 2008 only on Channel [v]. This film stars the very beautiful & versatile Neha Dhupia and a renowned international celebrity. It will also cast artists chosen through a nation wide talent hunt who would get an opportunity to be a part of this unique initiative. All this will culminate into a LIVE FLICK on March 2nd, 2008 and will also be released on the same date making it the fastest produced film in Bollywood history.
This mini blockbuster which will be enacted, shot and telecast LIVE on television for the first time has all the ingredients of a typical Bollywood film – a zalim baap, a gareeb hero, one bheegi bheegi heroine and a kameena villain. Only, all this is happening LIVE – No Cuts, No Retakes, No Guarantees.
Tune in to witness the thrills of this LIVE mini blockbuster which will be shot amidst select audience and will be telecasted LIVE on that day itself at 9 pm on Sunday March, 2nd, 2008 only on Channel [v]....