Sheetal Dabholkar, the simple Mumbaiite, who plays the beau of Prithviraj in Star Plus very popular weekend show, Dharti Ka Veer Yodha Prithviraj Chauhan is happy that she has now managed to get into the skin of her character in the serial.

The pretty Sheetal who is the cousin sister of popular actress, Ashwini Kalsekar gets into a candid conversation with our reporter, Ranjini Nair.. 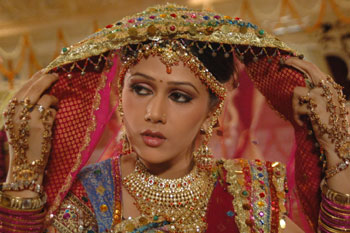 Featured Video
You replaced Pooja Joshi all of a sudden to play the role of Sanyojita. Can you take us thro' this..
I was called to audition for the role and I got selected soon after that. But even when I got the role, I did not know that I would be replacing Pooja and taking up the role of Sanyojita.

Many viewers feel you justify the role of Sanyojita very well. What do you have to say about this.
When I started playing the role, I really had no idea about the characterization of Sanyojita, but I improved gradually as I got more information. I can now say that I have at last managed to get into the skin of the character. Also, I have my fans calling me up regularly and appreciating my work. Even the channel is happy the way things are shaping up with my character.

How do you manage with the heavy jewels and heavy attire worn by you in the serial?
This is not the usual saas-bahu saga. It is the demand of my character that I wear heavy jewels and dresses. When I started, I used to have loads of problems with these big jewels, but now I am used to getting decked from head to foot (smiles).

Do you get to choose your dresses?
Yes, whatever I wear for the serial are chosen by me. Our producer's wife who is a designer decides on the dresses, but I modify them according to my needs if needed. Recently, in one of the episodes, I was given an Aishwarya look from 'Jodhaa Akbar' and I got a chance to select that dress too (grins).

Were you an avid watcher of the serial before you took up the role?
No, I had never watched the serial before. But I knew that the chemistry of the lead pair then was very much appreciated by the viewers.

So what motivated you to accept this challenge and step into Pooja’s shoes?
Well, this is exactly the work of an actor and I am honored to be part of this successful show.

What are the other projects you have in hand?
Right now, I am happy doing this role. I want to concentrate on Prithviraj now, rather than taking up more projects.

Would you be interested in taking up saas-bahu genre, if offered?
No, I am not interested in doing the usual roles. I want to do something different and I would always like to experiment with different roles.

14 years ago she is much better than pooja...and shez improving too.but the ay Mughda was essaying the role was brilliant.

well wish her all the best

+ 4
14 years ago i like anas & shaeetals pair & i love this fabulous show PRITHJVI RAJ CHAUHAN.

14 years ago it is really difficult for an actor to step into a character than sm1 else has been portraying, and even mroe hard for the viewers to accept them... if the audience is happy with her as Sanyojita, she must b doin a really good job!
shez really pretty...
gud luck to her :D