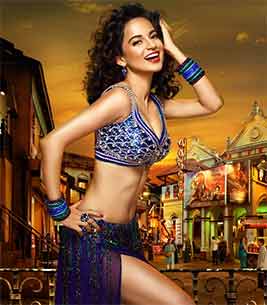 The Central Board of Film Certification (CBFC) has advised the makers of forthcoming film "Rajjo" to raise the on-screen age of the movie's hero from 18 years to 21 years. Director Vishwas Patil respects the decision.

The movie, releasing Friday, features Kangana Ranaut as a 24-year-old nautch girl, who is seen getting married to a character named Chandu, who is aged 18.

This has not gone down well with the censors as the legal marriageable age for men in India is 21.

A source close to the film says the censor board conjectures that this will send out a wrong message to the youngsters, and so have asked the filmmakers to increase the hero's age.

"I respect censor board's decision, and luckily there were no scenes where the actor and Kangana are talking about the boy's age," Patil said in a statement.

"It's just that I have taken the concept from a short story of Jayant Pawar...But yes, I will send a letter to the board once the film hits theatres," he added.

Produced by Four Pillars Entertainment, "Rajjo" is a musical extravaganza and promises to have something for both the classes and the masses.