Are you troubled by dreams that sort of indicate to a bad memory that comes from your past life? Are you confused with certain situations that haunt you which you fear are related to your past life? Well, Imagine's upcoming show Raaz Pichhle Janam Ka seems to be the answer!! 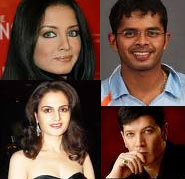 Featured Video
Lot of celebrity names like Karisma Kapoor, Sanjay Dutt, Shekhar Suman, Neil Nitin Mukesh, Sushmita Sen who have been approached for the show, have made the rounds in media reports.

And the list does not end here, as the latest is that Celina Jaitley, Monica Bedi, Sreeshant, Aditya Pancholi have been approached as contestants for the show.

According to our source, "The main criteria for a commoner or a celebrity to be part of this show is to have some sort of memory or illusion or bad dream that troubles him/her. Lot of celebrities including Aditya Pancholi, Celina Jaitley, Monica Bedi, Sreeshant have been approached for the show. Talks are on with them".

When contacted, Monica Bedi refused to comment on this.

We sent a text message to Celina Jaitley's manager, but we did not get any revert.

We contacted the host of the show Ravi Kissen who said, "I don't want to get into the contestants' names. All I can tell you is that I play the mediator between the contestant and the doctor, Trupti Jayin. I will ask the person about his/her problems, and then lead them to the doctor, who will start with the meditation course. After this is done, I will try to make the person feel good".

The show is expected to launch on NDTV Imagine in the last week of November.

something1985 13 years ago abt tis knwin stuff abt agle janam ka razz or nethn abt it....
well krishna bhagwan told arjun in bhagwat gita tat we all take new janam everytime we die... only the difference is tat i remember my every births and u dn't....and m sure tat we(humans) dn't remember is for the reason...but still if HUMAN BRAIN cn find a way to remember wats not suppose thn i think thy'll find something very interesting and unusual things abt their past....personally it wud b scary to knw but m sure alot of ppl wonder wat thy were doin b4 tis birth..I KNW I DO....:) well its gonna b intersting.....waiting egarly for the show...

+ 4
13 years ago seems to be a nice concept. lukg fwd to watching this one.

13 years ago Interesting. They have been a bad example in their present life. Now who cares what they have done in their past.

+ 2
13 years ago hmmm....their present life has gone fer a toss...
so probably want to knw wich bad deed they did in their previous janam!