View Profile
After being made the brand ambassadress of Egypt from India by the Egypt tourism board, Bollywood actress Celina Jailey took time out from her hectic schedule to make a trip to Cairo. The dynamic metropolis, which is also the largest city in the Middle East, left her impressed. 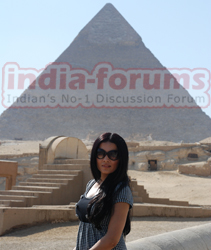 One of the stops for Celina and her team was Media Production City on the outskirts of Cairo. It's what Film City is to Mumbai. "They have state-of-the-art studios with best sets which can be used for shoots. I think they are very suitable for our Indian films. A hotel nearby makes it a good option," said Celina.

The actress and her team then met the minister of tourism, H.E. Mohamed Zoheir Garana, as well as Egyptian Tourism Authority chairman Amr El Ezaby. His Excellency, The Ambassador of the Arab Republic of Egypt, Dr. Mohammed Higazy, said: "We want people to know that Egypt is not just about the Pyramids. We are working strategically on the tourism industry in Egypt. For its growth, we are offering easy visas, lower ticket rates, various tour packages etc. We hope to double the number of Indian tourists to Egypt by 2009. We are spending half a million US dollars in the next six months to encourage traffic between India and Egypt ."

Celina also met up with a few Egyptian actors, including Dr. Ezzat Abbou-Ouf who is also president of the Cairo International Film Festival. Celina promised them that she would be part of this year's Cairo International Film Festival, scheduled to be held from November 27 to December 7. For one, the Egyptian authorities have already found a frequent tourist in Celina. And many more Indians would surely follow.