View Profile
In our immensely competitive and, let's face it, male-dominated industry, it can be very difficult to maintain the exclusive female protagonist spots. However this pretty lass only seems to be on the rise! Join Bollycurry as we take a snap shot look at the life and career of our Barbie Doll - Katrina Kaif. 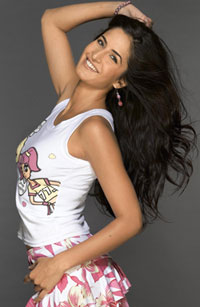 
Born to a Caucasian mother and Kashmiri father, Kat hails from a rich cultural background. After all, how many actresses were born in Hong Kong, spent their childhood in Hawaii, teenage years in London, now work in India, and claim beau in macho man Salman Khan? A thorough international, if one would admit!


Her stunning looks and wide-eyed innocent expressions were integral in landing her a string of modelling jobs which started at an adolescent 14 and continued until she procured Bollywood movie Boom - her first acting gig in a minor appearance.  What followed were two successful Telugu movies before the actress landed her first major Bolly Break with Maine Pyar Kyun Kiya and for this leading lady, there has been no looking back since!


Being in an industry where local dialect and accents were evident handicaps for her, Kat has worked hard to improve her Hindi and spends hours on her dancing in order to fit better in to the culture of our tinsel town. Whilst her career has most significantly been highlighted by glamoruos roles in romantic comedies, Kat has expressed a desire to do more serious cinema and we don't doubt that she will excel on all paths she treads upon!

* Hates make-up! In fact the glamorous actress much prefers a clean face and modest clothing to the likes of her on screen portrayals.

* As of 2009 became a Twilight fan - falling in love with leading actor Robert Pattinson (who plays Edward in the teen vampire flick) and reading the first three books in four days!