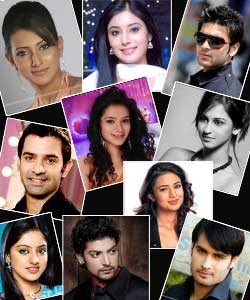 Names are a person's first identity. Apart from having a regular official name, we all have lots of nick names showered by our loved ones. We are blessed with different sobriquets by different sets of people who walk into our lives – Be it our family, friends, colleagues! Our Indian Television Celebrities are no different and have some of the coolest and funniest nick names. Tellybuzz tried to unearth nick names of some of your favorite celebrities and the story behind it:

Additi Gupta is popular as Audi amongst her friends.

Vivian Dsena is called as Viv by his friends.

Sukirti Kandpal said that, "My nick name is Bulbul because I am very chirpy and I love singing and dancing. I have also been nicknamed Suku by my fans."

Krystle Dsouza says, "I have three nicknames. My friends and fans call me Krystoo and Kittoo and my mom calls me Bubbly."

Gurmeet Choudhary who plays Yash in Punar Vivah said, "I am known as Shashi Kapoor and my elder brother is known as Raj Kapoor. Both of us got these nicknames by our nanaji, who dreamt for both us to be as actors."

Divyanka Tripathy Shares her nickname with us as Channi. Sharing the story behind getting this nickname she added, "Once my mom dad and my uncle aunty went for a movie, in which they saw a very cute girl named Channi. When I was born, they found me as cute as like that girl. So, they kept my name Channi & whole Bhopal calls me with this name."

6 years ago Barun sobti keep rocking as always be happy

6 years ago Barun sobti we miss you.

6 years ago I like yr nick name bhai
Barun Sobti...