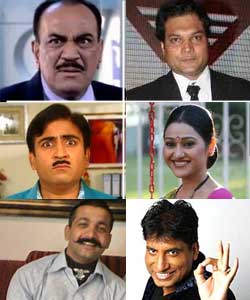 Zee TV's Sa Re Ga Ma Pa will have a memorable episode on the occasion of Independence Day with various celebrities gracing the episode.

A source from the sets informs, "Today Sa Re Ga Ma Pa will be shooting its Independence Day special episode. The theme of the episode will be National Integration where each contestant child will dedicate a song to a particular state and accordingly, celebrities have been invited to grace the stage and represent each state".

We too here Shifuji who is renowned as world's youngest Inventor of His own Martial Arts Fusion version will also grace the stage of Sa Re Ga Ma Pa and if sources are to be believed, he will be seen in Zee TV's Next reality show Jaanbaaz too.

We contacted Dilip Joshi and he says, "Yes, I and Disha have been invited to Sa Re Ga Ma Pa for their Independence Day Special".

All our efforts to get in touch with Shivaji Satam and Dayanand Shetty were in vain.

Seems Sa Re Ga Ma Pa is not leaving any stone unturned to give a tribute to our Nation..

Sunpra 9 years ago good news but why abhijeet sir is not coming?

DivianTanz_Divz 9 years ago I will watch it only for Daya sir...super hero. I hope he sings a song in that day.

Robie23p 9 years ago Thts awesome...!! But they should focus more on singing... They focus mostly on other aspects, other than the quality of singing... True flavour of the brand sa re ga ma is missing. Bt will watch the show only for disha and dilipji... They will make it a comedy show.. Gud..!

Wistfulness 9 years ago Great news, will watch it for my Daya sir:)

gendaphoolpn 9 years ago wow dilip and disha in it...i will definitely watch the episode, i watch it anyways because of jay soni..

HaHaHeHe-Hupp 9 years ago Its treat to watch all of them together in same show. Hope that it would be intersting .

will look forward to the episode

All the best to all contestants

Hasini_smile 9 years ago wow!! thts a good news.. waiting eagerly to see daya sir and ACP sir in the SRGMP show.. i wish they both sing one or two songs, bcoz they both have lovely voices...