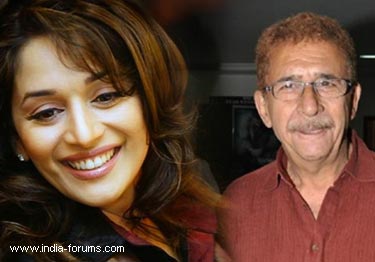 "Madhuri and I have worked together before. I am her fan. I don't know how many films of mine she has seen but I always thought she is a good actress and I am waiting to work with her again," he said.

Chaubey is all set to make the sequel of his 2010 debut film "Ishqiya". Of the original cast, Naseeruddin and Arshad Warsi have been retained, while Vidya Balan has been replaced by Madhuri.

Talking about the film, Naseeruddin said: "It is a nice step. I am also waiting for the shooting. It will be at the end of the year. I amw aiting also because it will be Abhishek Chaubey's next film. I feel it will be better than 'Ishqiya'."

Most veteran actors are becoming directors now, but Naseeruddin has no such plans.

"I will not be directing a film. It's very difficult and I admire the people who make good films. But I will not try," he said.

exclusive
Exclusive Saqib Saleem: It breaks my heart to see Bollywood's ...
2 minutes ago

Bhumi Pednekar admits being Intimidated by Ranveer Singh; ...
4 minutes ago

Naagin 5: Sharad Malhotra talks about romantic scenes with ...
46 minutes ago

Akshay Mhatre talks about the importance of a mother's hand ...
57 minutes ago