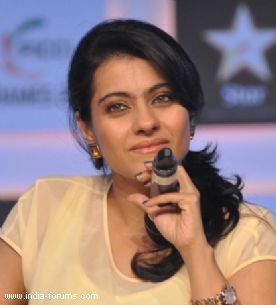 For actress Kajol, who is set to feature in her husband and filmmaker-actor Ajay Devgn's home production, her priority is her children and she can't "dump them and go off to work".

Kajol and Ajay, who got married in 1999, are the parents of two children - daughter Nysa and son Yug. After the birth of her daughter in 2003, she has done very few films such as "Fanaa", "U, Me Aur Hum", "My Name Is Khan", "We Are Family" and "Toonpur Ka Superrhero".

In an exclusive interview, Kajol told IANS: "My only reason why I am not doing films is my children. My children need my attention and it's my duty to give them my time. I have not given birth to them to just dump them and go off to work. I am not that kind of a person."

"I have my kids and I want to see them growing up and turn out the way I always wanted them to be. Even kids expect that kind of time from you, and my husband is always working. He does four films in a year, so at least I have to be with them."

A strict mother, Kajol felt that certain guidelines should be laid down to discipline children.

"Of late I have not been shooting; so I have been busy spending time with my kids. I am a very strict mother and as a mother it's my responsibility to guide my kids and tell them to go how far and no further. There should be rules and guidelines for the kids and they should know their limits," she said.

Aware of the fact that she has a fan following that wants to see her on the screen, the actress said she likes to have her space.

"I know my fans are waiting to see me on the screen, but I like my space and I like to do one film in a year or so and not more than that. I was always choosy but now I have become more chooser and picker when it comes to scripts," said the actress who has been active in front to the camera since 1992 and has about 40 films to her credit.

The celebrity couple came together on the screen in "Gundaraj", "Ishq", and "Pyaar To Hona Hi Tha", "Raju Chacha" and "U, Me Aur Hum", which was their last film together.

Meanwhile, the actress is also associated with "Help A Child Reach 5", which aims to eradicate preventable deaths like diarrhea by teaching lifesaving hand washing habits.

She said: "I am spreading this awareness and taking it nationally. I am pushing this campaign to other countries this year. We hope to bring the change."