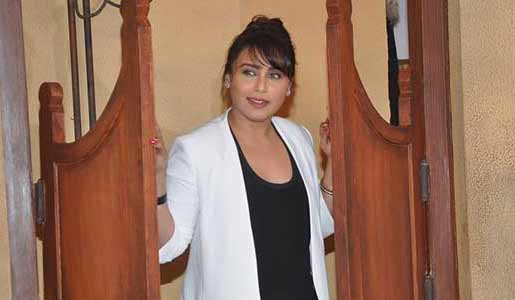 Popular actress Rani Mukherjee says her marital status won't affect her work and even a pregnancy won't come in the way as long as the director is comfortable.

After marriage, actresses often cut down on their work. Asked in a group interview if she too would do so, Rani said: "Not really."

She tied the knot with Yash Raj Films' head honcho Aditya Chopra in a hush-hush ceremony in Italy in April.

"Women try to cut down on work because they are pregnant and during that time they are physically not capable.

"In Hollywood, many actors work when they are pregnant. If a director is ready to work with me during my pregnancy, I will surely work," added the actress, who has recently shot down pregnancy rumours.

The actress, who continues to work post-marriage, admits a married actress' career hinges on "how supportive her husband is."

"Adi (Aditya Chopra) is a very supportive husband. I don't think he would want me to slow down. I don't know what my decision is going to be when I become a mother," said the actress whose "Mardaani", about trafficking of girls, hits screens Friday.

"I don't know how I will continue my journey in films. But I am in love with my job," she added.

Although Bollywood has come a long way when it comes to on-screen kissing, there are actresses who aren't comfortable locking lips or doing intimate scenes after marriage.

But Rani doesn't have any such hang-ups. She feels doing a particular scene is an actor's "individualistic choice".

"It also depends on whether she comes from a family that is not very modern in their outlook, or is she married into a family that doesn't give her the liberty to do certain things.

"I am married to Aditya, who is both a producer and director, and I think his mindset is very modern. I don't think he will ever come in my way of deciding what I want to do or what kind of films I want to be a part of.

"For us, a film means work. It is not something we look at from a common man's point of view," she added.

Every film's story is a subject that needs to be told in a proper way, she said.

"We portray it in a certain way. So when you get married, it's a very personal choice of that individual of how she wants to go about her career."

Criticism doesn't worry her either,as she knows that scrutinising artists for their choice of work is common and it has nothing to do with their marital status.

"If the actor has a hit, she is praised. But if she has a flop, people criticise her bad choice. So scrutiny comes whether (an actor is) unmarried or married. At the end of the day, one should do things that he or she likes to do," she said.

Meanwhile, like any wife, Rani wishes the best for her husband.

She said: "Definitely, I want this film ('Mardaani') to work. In fact, from now on I will not only pray that my films work, I will also pray that all YRF films are superhits (laughs)."