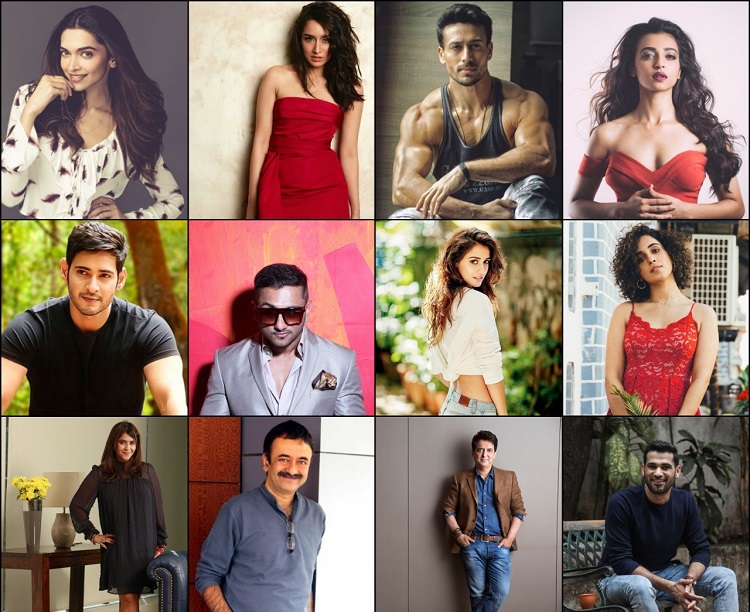 New Year is around the corner and it is almost time for us to bid goodbye to 2018. The year 2018, was an exciting year for both films and actors.
2018 has been a box full of surprises for the entertainment industry, films like Padmaavat, Baaghi 2, Sanju, Stree have left a mark on the audience. Not only films but OTT platform too has created waves digitally.
While the films have captivated the masses, Bollywood also witnessed exceptional achievers who have gone ahead to create an impact on audience and critics alike.
One told a historic tale in a grand manner, the other told a story unheard of and some others were totally out-of-the-box.
Hence, before the beginning of the New Year, let's take a look at all of the B-Town achievers of 2018.
Deepika Padukone: Deepika Padukone began the year with a bang with the magnum opus 'Padmaavat'. The actress not only won the hearts of the audience but also garnered rave reviews for her apt portrayal of Rani Padmini.
Termed as the Queen of 100 crores club, Deepika Padukone holds the most number of 7 100 crores films, while her last outing Padmavat clocking 300 crores at the box office.
Shraddha Kapoor: Striking a chord with the audience as the titular character, Shraddha Kapoor has won accolades for her unique character and apt portrayal of Stree.
After Ek Villain and ABCD 2, Stree becomes Shraddha's third film to cross the century.
The actress is being referred to as Stree wherever she goes. The much-loved performance of Shraddha Kapoor has definitely struck a chord with the audience.
Tiger Shroff: Bollywood's young gun Tiger Shroff surprised the critics and audience alike with the astounding success of Sajid Nadiadwala's Baaghi 2.  Challenging the norms of the industry, five films old Tiger Shroff shattered major records at the box office with his power-packed performance and enigmatic fanbase across the nation.
Tiger Shroff's contemporaries like Varun Dhawan and Arjun Kapoor have done lot more films than the actor, but the box office collections of the Baaghi 2 actor is way bigger than the highest film of other two actors.
Tiger Shroff has emerged as the youngest Bollywood actor amongst the lot to clock the fastest century as well.
Ekta Kapoor: Content Queen Ekta Kapoor has been mastering multiple mediums at the same time dominating the silver screen, television as well as the digital medium simultaneously.
Breaking stereotypes in the entertainment world, Ekta Kapoor carved a niche for her own, creating new content for the audience.
This year, Ekta Kapoor has been ruling over all platforms with content like Home and XXX in digital space, with film-like Veere dI Wedding and her very famous TV shows Naagin and Kasautii Zindagii Kay.
Honey Singh: This year Yo Yo Honey Singh has made a comeback into the music industry with a bang with chartbusters like Dil Chori Sada and Chhote Chhote Peg. He later came up with 'Rangtaari' from Loveratri and Party is over now from Mitron. He then rapped for 'Urvashi' which received a thunderous response from the audience across the globe.
Yo Yo Honey Singh's latest track "Makhna" is garnering a lot of views on YouTube and has become an instant hit with the youngsters.
Disha Patani: After the stupendous success of 'Baaghi 2' which earned whopping 165.5 crores at the box office, Disha Patani has bagged Salman Khan's upcoming film Bharat as well.
Mahesh Babu: Taking the global fandom of the Superstar into consideration, Mahesh Babu's political drama film 'Bharat Ane Nenu' was released in 45 countries across the globe. The film opened to huge positive buzz and packed houses all over. The movie had an exceptional run at the box office too.
After the roaring success of Bharat Ane Nenu, Mahesh Babu is currently busy shooting for his  25th film.
Radhika Apte: The talented actress has taken the film industry by storm with her back to back successes this year. Right from creating a mark with her first film this year to dominating the digital platform, Radhika Apte has ruled the year across platforms.
It has been a great year for Radhika Apte with the consecutive successes of her various projects from Padman to Andhadhun and the recently released Baazaar.
Radhika has carved a place for herself in not just the Indian film industry but also the digital streaming space. The actress' last outings Sacred Games, Lust Stories and Ghoul a lot of critical acclaim and love from her viewers.
Rajkumar Hirani: Rajkumar Hirani who is known for his excellent body of work has added another feature to his cap this year with the phenomenal success of Sanju.
After treating the audience with Bollywood classics like Munna Bhai M.B.B.S, 3 Idiots and PK, Rajkumar Hirani treated with yet another film which has created a mark on the masses globally.
With Sanju, Rajkumar Hirani has given Ranbir Kapoor's career new boost, just like Sanjay Dutt with Munna Bhai MBBS.
Touted to be a miracle maker, Rajkumar Hirani continued his bull run at the box office as his last release Sanju did a record-shattering collection at the box office.
Sajid Nadiadwala: Filmmaker Sajid Nadiadwala's first release of 2018 'Baaghi 2' has created a storm at the box office. The Tiger Shroff starrer has raked in 148.45 crores at the box office and is inching close to 150 crores at the box office.
Sajid Nadiadwala has pushed the envelope with his supreme production values and Tiger Shroff has delivered a stellar performance
Sanya Malhotra: Sanya's 'Badhaai Ho' has grossed 200 crores gross globally This is her second film to cross the 200 crore mark at the global box office
Sohum Shah: Sohum had already gotten a National Award for the first film as a producer 'Ship of Theseus' and this year he received his acknowledgment as an actor too.
Tumbbad turned out to be his true blue breakthrough.
Sohum Shah has worked on Tumbbad for 6 years to make his vision a reality. As it took 6 years for Tumbbad to complete, Sohum had to maintain the same physique and look for that duration.
0 Likes

Sanya Malhotra Shares Her Experience of Working on Shakuntala Devi: It ...

Tiger-Shraddha's Baaghi 3 holds the Record for Being the Biggest Day ...