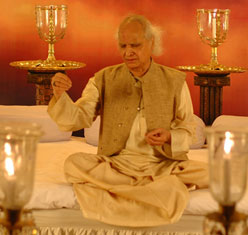 The genius Pandit Jasraj ji has sung for a song titled 'Waada Tumshe Hai Waada', for a promotional video for the film, whose shoot happened recently at Visaj studios, Jogeshwari in Mumbai.The song has music by Adnan Sami and lyrics by Sameer. The video has been choreographed by Raju Khan. The feature film 1920 is directed by Vikram Bhatt and produced by ASA Production and Enterprises Pvt Ltd.

About the story of film 1920, it traces the love story of an Indian boy and an English girl, set in locales from the vintage areas of Rajasthan of 1920 to Mussoorie and Bombay and a resort in the Himalayas. The two get married despite heavy opposition and the story unfolds on the premises of a supernatural thriller.