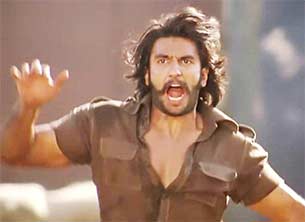 After scoring a whopping hit with the "Tu ne maari entriyaan" in "Gunday", actor Ranveer Singh and choreographers Bosco-Caesar have reunited for the condom ad which is creating ripples across the nation.

Apparently, Ranveer now plans to use Bosco-Caesar's choreography for his film songs as much as possible, much in the same way that Madhuri Dixit depended for her dancing on Saroj Khan.

Bosco said: "That's a tall order. But my partner Caesar and I are working towards a durable rapport with Ranveer. For us, doing this ad is as good as doing an award-winning song."

Bosco is all praise for Ranveer.

"He was the perfect choice for the ad. He was simply fabulous! His energy level was infectious. We were all charged up along with Ranveer during the shooting," he said.

The choreographer, who has composed numbers for Hrithik Roshan in "Zindagi Na Milegi Dobara", Shahid Kapoor in "Phata Poster Nikla Hero" and Varun Dhawan in "Main Tera Hero", says it was a cakewalk choreographing Ranveer for the condom ad.

"We had to make sure that the message was wrapped around the song and dance in a decent aesthetic manner. It wasn't difficult because we had such a good-looking actor with such a high energy-level endorsing the condom. The dance moves could never look cheap on Ranveer," he said.

"We recently did the very successful 'Gunday' song with Ranveer and now the condom ad. We hope to keep the momentum going. We did our best in the condom ad. We never expected to get such unanimous acceptance," he added.