Mumbai, Dec 10 (IANS) Two of Boney Kapoor's productions are being readied for release in the second half of 2008 - one of them has Salman Khan in the lead and the director is looking for an apt title for the movie.

'The Salman starrer which we earlier titled 'Wanted Dead And Alive' is now without a name. We've completed the entire talkies portion in Hyderabad last week. Now only four songs remain to be filmed,' Boney told IANS.

The 'No Entry' star plays a cop in the movie, which is a Hindi remake of the Tamil hit 'Pokhiri'. Other than Salman, Ayesha, Om Puri and Mahesh Manjrekar play important roles in it.

Salman had a turbulent year because of his court cases, but Boney says he never lost confidence in him.

'Even the legal hassles never bothered me. Contrary to rumours my film never got delayed because of Salman. We've been moving ahead on schedule. Salman has been extremely cooperative.'

'Again there's no title for the film. We like to create an aura of mystery around our projects.'

What about the woman in Boney's life? When does wife Sridevi intend to make a come back?

'Trust me, I'm as anxious about Sri's comeback as all her fans. Why wouldn't I want to utilise such talent and beauty from my own home? But we can't put her in any project. The script has to justify Sri's presence. And we're working on it.'

So, watch out for Sridevi's comeback vehicle soon. 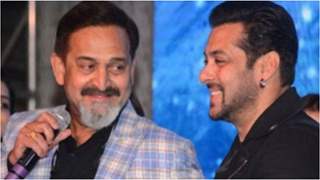