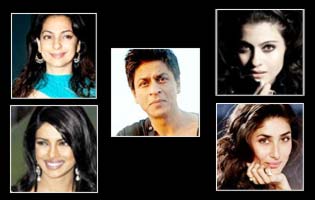 New Delhi, Sep 26 Be it Juhi Chawla, Kajol, Priyanka Chopra or Kareena Kapoor - Shah Rukh Khan has shared beautiful onscreen chemistry with most of his co-stars and the Bollywood superstar says the secret lies in his bonding with his co-stars.

'People think that I am working for so many years, so may be I am used to working with every co-actor. I have so much respect for my co-actresses that I really enjoy working with them. Also, as 99 percent of my films are romantic, you need a lot of bonding, a lot of sharing with each other, this brings out the goodness of scenes we produce,' Shah Rukh said at a Geetanjali event here.

Shah Rukh who wooed newcomer Anushka Sharma in 'Rab Ne Bana Di Jodi' said: 'My first film with Anushka was 'Rab Ne Bana Di Jodi' and I felt that she is a good actress. She is young, sweet, bubbly, energetic and really wonderful to be with. I look forward to working with her and she has a different way of acting. I really like it. She has a robust style of acting. Very carefree and I like that a lot.'

Now, the lover boy image of Shah Rukh is on hold for some time, as the dimpled-smile actor has been busy with sci-fi 'Ra.One' and actioner 'Don 2'.

'Ra.One', a superhero film, has been directed by Anubhav Sinha and stars Shah Rukh, Kareena Kapoor and Arjun Rampal. The film is slated for release Oct 26.

Recently, SRK said that he is looking forward to doing a soft romantic film.