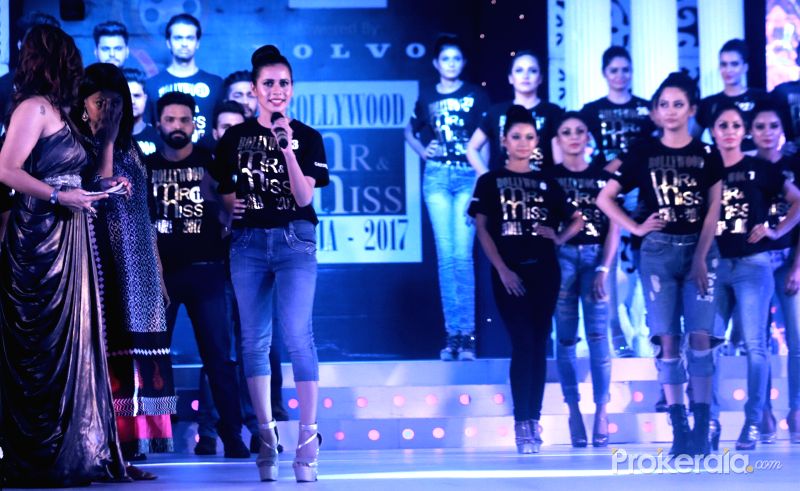 Studio 19 Films organised first of its kind Bollywood pageant, "Bollywood Mr. and Miss India 2017" presented by Mahagun and powered by Volvo held on June 24th (Saturday) at Crown Plaza, Rohini, New Delhi. Participants from all across the country showcased their talents.
The winners who were crowned with the title are - Sarthak Verma from New Delhi for Bollywood Mr. India 2017 and Savina Birla from Chandigarh was crowned as Bollywood Miss India 2017.
There were eminent Bollywood and television actors sharing the stage for Bollywood Mr. and Miss India 2017. The Jury panel unveiled the winner's name for the golden ticket to Bollywood on the finale evening. The jury members comprised of Mr. Arbaaz Khan (Actor/Director/Producer), Ms. Sana Khan (Actress), Ms. Mahima Chaudhary (Actress), Rajnish Duggal (Actor), Ms. Claudia Ciesla (Actress), Debina Bonerjee (Bollywood &TV star), Simran Kaur (Actress , serial- Agniphera), Mr. Yash Ahlawat (Actor/Film Financer) and many high profile dignitaries, bureaucrats and page 3 of Delhi were also present at the do.
Actor Arbaaz Khan Jury member of the pageant said, "Every participant is special and hold the zeal to make it to the Bollywood. On being asked, what it takes to be a successful Actor, said dedication, focus, hardwork and talent is the key to become successful. He also wished Eid Mubarak to everyone.
On the occasion, Yash Ahlawat, Actor and founder Studio 19 films said, "This is for the first time that a pageant is giving direct entry to bollywood to the winners . He also said, being part of the bollywood industry, I have closely seen extremely talented actors struggling hard to be an actor, specially from 2 tier and 3 tier cities and hence created this platform.
Ruchiekka Krishnani , CEO Studio 19 Films said, "Studio 19 Films is a major platform that is emerging to give wings to the dreams of young models and aspirants. With short films and ad projects, one can directly enter the silver screen. With Studio 19 Films, one will be properly trained and groomed for the screen tests."
Prime rose Decor Private Limited was the Decor Partner, whereas INIFD, SMC Bizz Helped us in finding the talent across India in 64 Cities. The Make over partner was Bharti Taneja. Few other esteemed partners are as follows Floret, Artisto Design, Gritstones, Chitra Advertising Service, Luxury Ride, Sanguine, RDX, Freak Out, My Fragrance, TBC by Nature, SMCBiz, Artist in India. The event was in association with Ruchiekka Krishnani and Desi Showbiz.
Ritika who designed the Ethnic collection for the evening from Dezignare Fashion has best designs portraying the Indian ethnic culture. The showstopper for the collection was Debina Bonerjee.
Mukta Walecha who was the brain behind the Western Outfits for the pageant is from K Studio that has seemed the collection with the perfect body style and posture. Show stopper of the show was Simran Kaur (TV Actor- Agnifera).
Prromila from Cocoon have designed the evening wear gown collection for the contestants and showstopper for her collection was Claudia Ciesla.
The finale took a final take after six rounds of the play prior announcing the winners which involved their life mentoring sessions by Vibha Sudarshan, Alok Sharma held motivational talk discussions to boost morale and self - confidence. The earlier sessions were of meditation and power yoga by Shyla Kohli to channelize the positivity and de stress the contestants for the final show. With complete Makeover by Gunjan Taneja Gaur and styling by Anuskha Tugnait, the contestants were all set to rock the ramp. Portfolio photo shoots were also conducted by Varun Chauhan before striking the final walk. The official Choreographer for the event was Mr. Vijay Roy
About Bollywood Mr.& Miss India-2017 -
Bollywood Mr.& Miss India is a pageant with fantastic opportunity for all aspirants to live their dream of winning a title and taking the first step for being recognized as a brand. This pageant conducts auditions in 64 cities, so that maximum aspirants get an opportunity to participate. Expert panel of choreographers, supermodels and celebs conduct the auditions, ensuring that no deserving candidate misses an opportunity to shine. Once the audition finishes, there is an extensive grooming session for the selected candidates for polishing them to show their true shine on Grand Finale in front of celebrities, bureaucrats, high profile dignitaries, page 3 & all the major media!
0 Likes

Debina Bonnerjee recollects how she felt while shooting for Ramayan!

review
Review 'Bandish Bandits' Hits The Right Tunes With its Acting ...
48 minutes ago