Hello lovely readers! How are you all? I bet you all missed our lovely features on powerhouse Bollywood jodis! Well, fear not, we're back to tell you about yet another couple in tinseltown that is a jodi made in heaven! 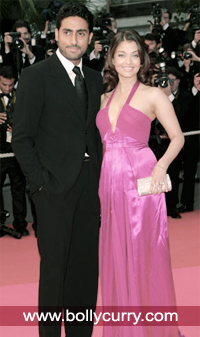 So this week's lucky Jodi is none other than the hot Abhishek Bachchan and the very sexy Aishwarya Rai Bachchan.

In their past, the two charming actors have had numerous link-ups with other well known actors but their paths crossed when they were paired together for movies such as Bunty Aur Babli, where they shook a leg to the classic Kajra Re, Umrao Jaan and Dhai Akshar Prem Ke. Somewhere along the line, they developed mutual feelings and this was not lost on our ever-present paparazzi, leading to numerous speculations about their relationship. The duo made it official by declaring their engagement on January 14, 2007 at an award function, much to the distress of numerous people who were sad to see them off the 'market'. The announcement was then confirmed by Amitabh Bachchan.

The due tied the knot on April 20, 2007. The marriage rituals were done in the Hindu tradition and the marriage became one of the most talked about events, not just among the elites but the whole of Mumbai and other parts of the world. The joyous occasion was named Prateeksha. The wedding itself was relatively close-knit with the majority of the industry being left off the guest list leading to some controversies!

Currently, the couple are happily married and represent one of the industry's most powerful couples!

We, at Bollycurry, wish this beautiful couple a happy life!
10 Likes