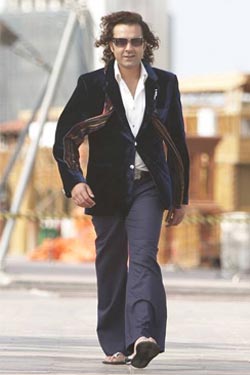 K Sera Sera's long stuck film 'Ek- The Power of One' is in for tough times, as the lead actor, Bobby Deol has now refused to dub for the movie until the amount due to him is given. The result is that, the release of the film is pushed even further..

The film which stars Bobby Deol along with Nana Patekar and Shreya Saran is under water now, and according to our sources, the reason behind all this confusion being, the producer requesting Bobby to adjust a bit with his fee, which was totally unacceptable to the star. Well, Bobby Deol being the 'Star Son' and the youngest of the Deol clan must have thought that he is worth a lot!! But Bobby needs to come to terms with his popularity at the box office too, where he has nothing at all to talk of, isn't it?

According to the Bitch's source, "Bobby Deol's brother Sunny Deol was given Rs. 1.5 crore as token for an untitled film of K Sera Sera which never took off. Later when Bobby was roped in for this film, the producers asked the actor to work in the film for the 1.5 crore given to Sunny. But the younger bro did not feel comfortable when money matters were mixed between his brother and him! The actor demanded a more professional approach and stepped back. Well, is their unprofessional approach, the real reason for the refusal? Or is something really brewing between the brothers, so much so that they do not even want their work to be mixed together?

Whatever the reason might be, the sufferer is surely the producer as the film, as the film which was slated for release in March will not see broad day light for another three to four months!

Adds the source, "There will be a final meeting soon after which Bobby will decide whether or not he will dub. But it's sure that unless they pay up, he's going to seriously shut the hell up. If they don't, they will have to opt for someone else's voice."

Bobby is surely a tough master to deal with, but the main question is, if Bobby is so very choosy and pricey, why on earth did his films, 'Shakalaka Boom Boom', ' 'Jhoom Barabar Jhoom', 'Naqaab' and 'Nanhe Jaisalmer' doom at the box-office?-(SAMPURN)
Featured Video