View Profile
Anil Kapoor tells SAMPURN that there is no more an age barrier as far as cinema is concerned.

Anil Kapoor is quite excited about the role that he is 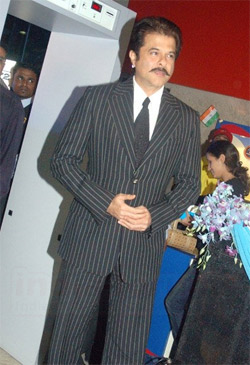 Featured Video
playing in Subhash Ghai's latest film as a director- Black & White. When I met him on the sets of the film at Film City recently, Anil stated that it was quite challenging for him as an actor to essay the role of an Urdu professor who lives in Chandni Chowk in New Delhi in the film. "It is a kind of character with which a layman can easily identify with", quips Anil.

According to Anil Kapoor, the film Black & White is quite an entertaining film which drives home the subtle message that it does not pay to be a terrorist. Says Anil, "It is perhaps for the first time in his career that Ghaisaab has set out to make a realistic film even while retaining his individual stamp as a maker, like Black & White" .

Black & White is a film, as Anil see it, is set to tell the story of a terrorist and his journey to accomplish his only mission in life. "It is a journey that lasts for exactly 15 days in the heart of Delhi's Chandni Chowk- a journey that changes his life radically".

Anil Kapoor confesses that he has always been a great fan of the music of every film that Subhash Ghai has set out to make, whether it was Ram Lakhan, Pardes, Taal or for that matter Khalnayak, whether he himself was a part of the star cast of the film or not. "Ghaisaab has always had this uncanny knack of having an impressive track record in producing super hit sound tracks for his films."

Anil has been pitted in the film Black & White opposite a seasoned actress like Shefali Shah who plays his wife. Besides Shefali, Anil's other co-stars in the film are Akash Khurana, who plays a key character role and new comer Anurag, who has been cast as the student who unwittingly gets entangled in a web of terrorism.

Anil confesses that people have liked him a lot whenever he had donned the role of a tapori, whether it was his chakas role in Tezaab or for that matter Subhash Ghai's Karma and hence he was very confident that for his fans it will be a pleasant shock to see him getting into the skin of a character like the Urdu professor who is extremely shareef , in Black & White.

Did you have to do some extensive home work in order to prepare yourself to get into the skin of your character in Black& White? Pat comes the reply from the versatile actor, "Considering that the back drop of the film is Chandni Chowk which is a very crowded place in the capital city, it was quite a difficult task to go there and do research as an actor before the shoot began. However I did take it as a big challenge as an actor to prepare myself for my character and took the risk of roaming around in Chandni Chowk before Ghaisaab had started the shooting for the film"

Anil admits that there were a couple of hilarious moments when he went around in the crowded area to do his home work. "I went clad in a burqa and the cops grew suspicious about me when they saw me walking with the gait of a man, though I was clad in a burqa and around a hundred and fifty odd guys chasing me, wh

o followed me all the way. They left me only after they came to know that I am Anil Kapoor and not any suspicious character who was impersonating a woman clandestinely."

Anil confesses that after the cops chased him when he was wearing a burqa, he decided to give up the idea of roaming around the area in a burqa and hence he wore a helmet so that no one could see him and took a pillion ride in a friend's motor-bike to soak in the ambience of Jama Masjid. Anil adds. "I should confess that it was indeed a very great learning experience as an actor on the sets of Subhash Ghai's Black & White"

Anil whose daughter has already proved to be a good actress with Sanjay Leela Bhansali's Saawaria says that there is no more an age barrier, as far as Cinema is concerned.. "Watch out for this new boy Anurag. He is going to go places. Mark my words", says Anil, who also says that ever since he was introduced to Anurag, he had decided to go in for more exercises to pump himself in, to keep pace with Anurag

"Black & White is not any one particular actor's film. It is as much my film as it is that of Shefali or for that matter Anurag's film. To tell you the truth, Black & White is a Ghai film in which all of us actors are just small characters".

Anil goes gaga over Subhash Ghai with whom he has acted in quite a number of films like Karma, Ram Lakhan, Taal and now Black & White. "Right from his first film Kalicharan till Black & White, Ghaisaab has churned out as many as 13 to 14 super hits but has not got tired at all", Anil concludes.