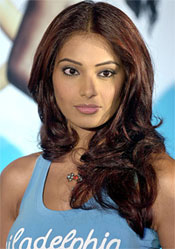 She took the stage twice, grooving to a vibrant mix of foot tapping numbers. During her first appearance she made the audience jig to title songs of her films 'Race' and 'Bachna Ae Haseeno'.

The second time she took the stage 10 minutes before midnight and charged up the atmosphere by performing to a medley of hit songs.

Actress Anjana Sukhani who acted in the movie 'Golmaal Returns' was the other attraction of the night. She performed to a couple of popular tracks from her films along with 'Marjawa', a famous song from the movie 'Fashion'.

Singer Sudesh Bhosle regaled the crowd with his songs and mimicry with Preety Pinki. The Indipop duo belted out some of their major hits.

By the time DJ Amann took the consol, the mood was already set so he just pepped up the night by churning out some hit numbers.