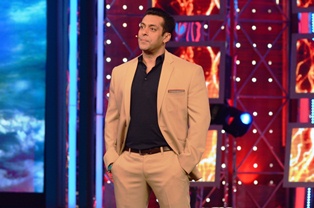 If there is one thing that Bigg Boss Season 8 promises, it is power-packed entertainment for the viewers. Be it through the antics of the contestants as they spend weeks inside the Bigg Boss house, or through the contestants' interaction with superstar host Salman Khan, every episode of Bigg Boss makes for an entertaining watch.

As the 14th week inside the Bigg Boss house draws to a close, a joyous occasion is set to change the mood inside the Bigg Boss house...and outside too! This Saturday, 27th December, 2014 marks the birthday of host Salman Khan. And nothing could prepare him and the viewers for the turn of events as Bigg Boss decided to celebrate the actor's birthday in great style with the actor getting a special present - a day off to ring in his birthday and celebrate the day with his near and dear ones. Consequently, the nomination and eviction episode will be pushed by a day and will be shot over Sunday and Monday instead.

However, this, in no way suggests that viewers will not be treated to a visual extravaganza on the occasion of his birthday. A special treat has been planned which will double the dose of entertainment for both - viewers and contestants as Kapil Sharma and his whacky family takes over the Bigg Boss house for a special episode which will leave everyone in splits.

Kapil Bittoo' Sharma and his family comprising of Dadi, Bua, Gutthi, Palak and Siddhu ji will enter the Bigg Boss for a special edition of Comedy Nights With Kapil as they engage the contestants through this laughter riot and make for some huge laughter-inducing moments. As the most hilarious family of telly-land takes over the house, they will engage in some witty banter and change the atmosphere inside the Bigg Boss house and bring some comic relief.

Even as preparations are on in full swing, we cannot help but wonder which pretty lady from amongst Sonali, Dimpy and Karishma will be the target of Kapil Sharma's flirtatious charm, and who among Ali, Gautam, Upen, Puneet and Pritam will get Dadi's trademark Shagun Ki Pappi'. Will Bua find herself an eligible groom in the Bigg Boss house? Keep watching as the action promises to be a dose of laughter unlike ever before!

+ 4
9 years ago Hmmm maybe she should have given a name to "Beti B" while she was at their residence. Sad to be nameless even after two months...