View Profile
Right from the time "Ram Gopal Varma Ki Aag" was announced, Big B was presented as the main draw of the "Sholay" remake. Yet, Amitabh Bachchan seemed visibly upset after attending a special screening of the film at Adlabs preview theatre, situated in Film City , on Tuesday evening. As the movie wrapped up, the veteran actor left with daughter Shweta without speaking to anyone. 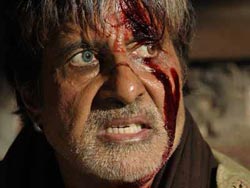 Bacchhan had reportedly only seen the previews of the movie before and was very excited to watch the final product. A source present at the screening said: "Ram Gopal Varma and Big B had a tiff over something. There were some scenes which were shot but were missing in the movie. This did not go down well with the actor, and hence, he walked out without speaking to anyone. He did not even exchange pleasantries and all his enthusiasm was gone. He was visibly upset over the issue."

The superstar has already signed Varma's forthcoming film "Sarkar Raj" which also stars son Abhishek and daughter-in-law Aishwarya. Wonder whether the movie will materialize if things go really sour between the actor and director