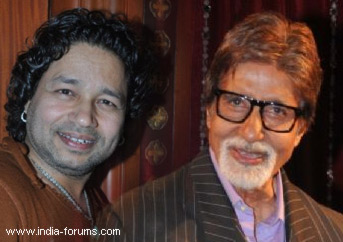 The event witnessed a scintillating live performance by Kher.

Besides Amitabh, who has narrated two lines in one of the songs, the album features a young singer - Kabir, Kher's two-year-old son.

'Amitabh Bachchan has a two-minute narration in a track while Kabir, my son, has lent his voice for 20 seconds in a desi track,' Kher told reporters.

'The album has an emotional touch in each track which can be related by every individual,' he said.

Kailash Kher's music is genre in itself, with smash hits in the past like 'Teri Deewani' and 'Saiyaan' that created the trend of soulful music with elements of folk and traditional music.

This musical evening also saw the presence of many singers like Sonu Nigam, Alka Yagnik, Shankar, Anu Malik, Hariharan and Hard Kaur, among others.