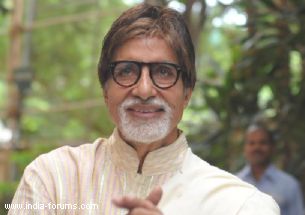 Bollywood superstar Amitabh Bachchan says that this year Holi has coincided with his daughter Shweta Nanda's 40th birthday and he is spending the day with her.

"We do not celebrate it (Holi), again. There have been discomforting news for the year, the passing away of relations distant...it would be disrespectful to be immersed in the colours of abandon and joy when some among us mourn," Amitabh posted on his blog Sunday.

The 71-year-old is spending the day with Shweta.

Recalling her childhood days, he wrote: "Dear me...so many years, and we still treat her like that cute cuddly little bundle who would stare at me in wonder every time she would come to pick me up from the airport after a long stint of shooting from out of the country or land."

"She would wonder who I was, and what I meant to her, for absence from her for long days would perplex her...she was just a couple of years old," wrote Big B, who has two children - Shweta and Abhishek - with his wife and actress-politician Jaya.

"When she comes home to Jalsa (Amitabh's Mumbai home), it's never as though she went away and she does not ever allow us to feel that she left... daughters have a way of doing that, and doing that well...She remains our chief executive officer and we turn to her for all the tough decisions that come our way.

"Daughters have a sense of the sixth, one that never fails to ring that cliched bell within us...for us it always rings well and loud. We are blessed and proud," he added.