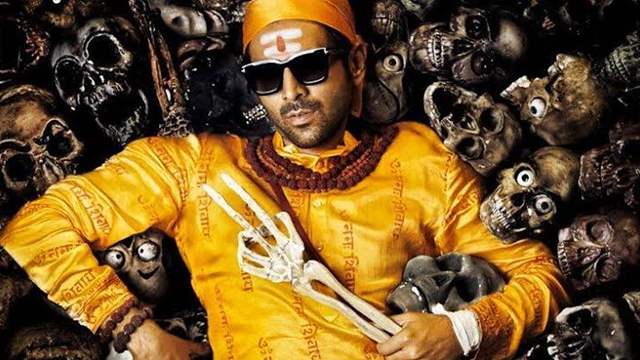 However, since the announcement of the release date of the film, the enthusiasm of the fans of this film has increased.

Kartik was seen in a yellow outfit holding human skulls in his hands, in all the looks that came out of this film till now, but this time in the new poster (teaser) the actor is seen wearing black clothes.

In the teaser, he is seen sitting on the top of an old monument (the dome), behind which there is a full moon and flying crows and eagles are shown. Scary voices are heard in the background.

Talking about his look in the film's teaser, you can see how he is sitting in the top angle of the dome showing his swag - wearing black goggles on his eyes, wearing a garland of Rudraksha in his neck and hands and wearing high boot shoes on his feet.

Kartik's look in the teaser looks very scary and surprising.

The background score in the motion poster also looks quite interesting it is of Akshay Kumar's Bhool Bhulaiyaa title track.

Let us remind you that earlier this month, Kartik shot the climax scene of this film.

Giving information about this, he described it as "the most challenging sequence" in the caption. This sequence lasted a week.

Apart from Kartik Aaryan and Kiara, Tabu and Rajpal Yadav and Govind Namdev, will be seen in important roles. It is a horror comedy film.

The film is being produced by Bhushan, Murad and Krishan Kumar.

The film is directed by Anees Bazmee, who has previously given hits like 'Welcome' and 'Ready'.

According to the report's, the story of the film 'Bhool Bhulaiyaa 2' will be completely different and interesting from the first part.

'Bhool Bhulaiyaa' was directed by Priyadarshan. It was released in the year 2007.

27 days ago @DaddyMarvel Seems like you can’t differentiate between a mosque and a temple.

28 days ago Why is he sitting on top of a mosque wearing a Hindu outfit? Why not on top of a temple? Stupid Indian filmmakers! You guys will burn in hell for your cheapness. I hope this film fails miserably.