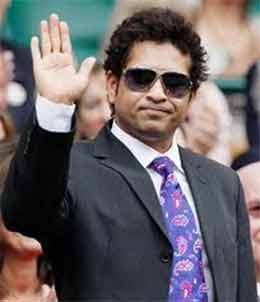 Actor Anil Kapoor has lauded the government's decision to confer master blaster Sachin Tendulkar with Bharat Ratna, the country's highest civilian honour, and says it is a great send-off.

"I was very happy when I came to know that Sachin Tendulkar has been honoured with Bharat Ratna. I think he is the well-deserved Indian for the award," Anil told reporters at the first look launch of 3D mythological film "Mahabharat".

Sachin bid adieu to international cricket after playing his 200th Test at the Wankhede Stadium in Mumbai last week.

The 40-year-old made an emotional speech before the packed Wankhede Stadium and paid respect to the game he loves by touching the turf of the ground where he made his Ranji Trophy debut in 1988.

Anil, who got an opportunity to meet Tendulkar personally, is floored by his down-to-earth attitude.

"I have been very, very fortunate to have met him, spend some time with him, spoken to him. He is a very down-to-earth, very, very understanding. He has become more humble with the success coming his way," he said.