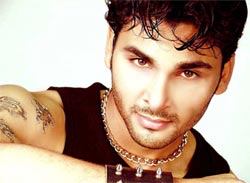 Yesterday Telly Buzz gave you the news of Kasturi’s lead protagonist, Karan Patel being cast as lead in Mahesh Manjrekar’s next film. Today we are back to give you the news of yet another new entry in Kasturi!!

After Mohnish Behl, the show will now see Bharat Chawda, Ishaan of Kahaani Ghar Ghar Ki entering. According to our source, “He will play a very important character. He will be seen as the parallel lead; a very positive character, who will help Kasturi initially and eventually will fall in love with her”.

We called Bharat Chawda to know more on his role, but he preferred to remain tight lipped.

Well, to know what more is in store for Kasturi, keep watching this space..

9 years ago Kasturi with Mohnish Bahl was a good serial !

14 years ago agree..karan said in his interview that he is not leaving the show .karan is v hardworking guy i am sure he will manage both the sechedule.production house including shubhangi all his co stars r v cooperative i am sure they will give him some pace for movie.in this 18 month of kasturi show he did nachbaily.kaho na yar hy.bollywood ka ticket as well i am sure he will manage all this.so dont worry robbie and kasturi r made for eachother no one seperate them and no one will be able to replace them.

14 years ago omg i know first Kasturi and Robbie need to get back together. and there is no need to create any obstacles lol x bt therez no point of saying owt Ekta Kapoor will do the obstacle creating job very smoothly. lool x

14 years ago PLZ FIRST UNITE ROBBIE AND KASTURI AFTER THAT CREATE OBSTACLES...

+ 3
14 years ago Thanks for this!
Pinkies right atleast unite RoKa then bring as many obstacles as you want!!
Samiya=)

14 years ago plzzzzzzzzzz EKTA FIRST UNITE OUR LOVE BIRDS ROBBIE AND KASTURI HEN BRING 500000000000000 NEW ENTRIES AND TWISTS WE DONT MIND...PLZ BHARAT CHAWADA UNITE OUR rOkA...EVERYONE SEPERATED OUR LOVE BIRDS BUT U CANT DO THIS JUST UNITE THEM..B/C rOkA R MADE FOR EACHOTHER...