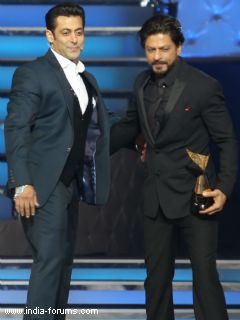 The 9th edition of the Renault Star Guild Awards witnessed the biggest stars of the Indian Film and Television industry at Mumbai's NSCI Ground, Worli. The eventful night saw Salman Khan take centre stage for the second year running as the host for the evening, sharing screen space and a brilliant camaraderie with his colleagues.

Bhaag Milkha Bhaag was the favourite of the night, walking away with 8 awards.  Farhan Akthar swept the Best Actor in a leading role category and saw the film take home Best Screenplay and Best Story for Prasoon Joshi, Best Cinematography, Best Sound Design, and Best Actress in a supporting role for Divya Dutta, Best Director for Rakeysh Omprakash Mehra and the enviable Best Film award for Viacom 18 Motions Pictures and Rakeysh Omprakash Mehra.

Speaking of his Best Actor in a leading role, Farhan Akthar said, "The biggest thank-you goes to Milkha Singh and his family for all the support and passion that he put in to me. When I met him for the first time, he told me about the sacrifices he went through in his life and Prasoon has captured it very well in the title track."

2013's heart-warming, ' The Lunchbox' won 3 awards including Best Actor in a Supporting Role for Nawazuddin Siddiqui, the Star Verdict Awards for Irfaan Khan and The Yash Chopra Award for the Most Promising Debut Director to Ritesh Batra.

Commemorate the 100th birth anniversary of late filmmaker Khwaja Ahmed Abbas, the Guild also introduced the K. A. Abbas Honour for Cinema with Social Sensitivity. Amitabh Bachchan gave away the award naming the film, Shahid as its first ever recipient.

The evening was coupled with enthralling performances by the superstars themselves including Kareena Kapoor Khan, Prabhu Deva who was joined by young starlet, Sonakshi Sinha, Shahid Kapoor, Shraddha Kapoor and Jacqueline Fernandez.

The Renault Star Guild Awards have been instituted by the Film and Television Producers Guild of India with an objective to establish a standard for honouring excellence and achievements in the Indian film industry.