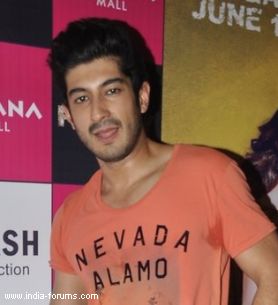 Actor Mohit Marwah who is making his Bollywood debut with "Fugly" has the pedigree. His uncle is Anil Kapoor. And his cousins are Arjun and Sonam Kapoor. But he chose to go through a string of auditions and training for his break as he believes the feeling of being self-made is incomparable.

In an interview, Mohit has shared his journey to getting a role in "Fugly", his struggle, his camaraderie with his famous family and his training.

Q. What is it like to be waiting for your first film ?

A. There's actually no time to think of it. All four of us (Vijender Singh, Kiara Advani, Arfi Lamba and I) who are part of the "Fugly" cast have been running around like headless chickens from city to city promoting the film. Sometimes when I wake up, I don't know which city I am in.

Q. Was acting a pre-given career considering the family you come from?

A. Not really. Having spent most of my childhood in Delhi, I was pretty much away from Mumbai's film culture except through Boney mama and Anil mama's family. Only when I was in class 12 did I start looking at cinema as a career. After completing my schooling, I joined a film school in the US and then assisted a couple of directors. Now here I am.

Q. Did Boney and Anil help you get your first break?

Q. But it's a very long and painful process?

A. Yes. But the sense of satisfaction that I felt when I finally got 'Fugly'...it's hard to describe the feeling of being self-made. I'm lucky to come into the film industry at a time when new talent is being welcomed. So many new actors are coming in. I couldn't have chosen a better time.

Q. How did you overcome your shyness?

A. I told myself that if I wanted to be an actor I had to be a 'besharam' (shameless). I chose to study cinema in New York because it helped me open up my personality. I came back and acted in short films, one of them for Karan Johar's Dharma Productions which Shakun Batra directed.

Q. Were you on your own in New York?

A. For a year I was living with two other students from India. Then during my second year, my cousin Rhea (Sonam's sister) joined me. The two of us rented an apartment together. That was a fun phase. That was a home away from home.

Q. You could choose to lead a pampered life?

A. I feel it's better to face the hardships in the beginning. It is important for me to undertake that journey of my career on my own. But let me tell you, my struggle became far easier because I have so much family around.

Q. Do you look up to your uncle Anil Kapoor as an actor?

A. Without a doubt. I've seen how much of himself he puts in every role. His passion is unmatched. From the time I was a kid I knew what we see is not just acting. There is a lot of hard work involved. He's punctual, hard working and fully focussed. I believe I've inherited his passionate energy.

Q. Do you see yourself competing with Anil Kapoor's son Harshvardhan when he makes his debut next year?

A. Not at all. All of us Sonam, Arjun, Harshvardhan and I have distinct personalities. The roles that Arjun is doing right now can't be done by anyone else. In any case, I'm closer to Arjun's age than Harshvardhan's. But I'm so happy there are so many of us.