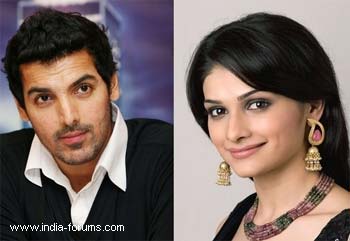 Producer Goldie Behl is confident that Sridevi's iconic song "Na jaane kahan se aayi hai", which is being reprised in his forthcoming film "I, Me Aur Main", will be one of the biggest entertainers of the year.

"It's being recorded and my director is working on it. We are really looking forward to it. It will be one of the most entertaining songs of the year, I am sure," Behl told reporters here.

The song will feature John Abraham and Prachi Desai. Directed by debutant Kapil Sharma, "I, Me Aur Main" also stars Chitrangada Singh and is slated for July release.

_*_I am an entertainer: Prateik

Actor Prateik, who has not given any big hit so far, says he is an entertainer and has an urge to entertain people.

"That's what we are here for, we are all entertainers, that's our job. I do believe I am an entertainer, I don't know how entertaining (I am) and there is an urge to entertain, definitely," the 25-year-old told reporters here.

Despite the fact that Vidyut Jamwal's performance was appreciated in "Force", the actor hasn't got too many good offers.

"I would not say that I have a lot of offers and I am reading scripts, like others say. Yes, I do have a few and will soon decide on them. Hopefully, everything will turn out to be good," the 32-year-old said here in an interview.

Vidyut worked in Tamil and Telugu films before bagging the role of a villain in "Force" for which he bagged Filmfare award for the best male debut.

Vidyut is satisfied with both, his professional and personal life.

"My life is very perfect, not from now, but it always has been. I hope it continues this way," he added.