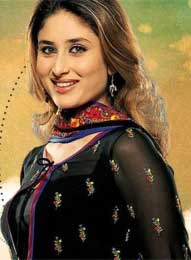 After creating a rave industry wide over the zero-figure trend, Saif's sweetheart and Bollywood's glam girl has gone another mile in her fashion mantras, this time donning the look of a simpleton. A rather strange tangent one might think but Kareena Kapoor is a serious actress. For Rajkumar Hirani of Munnabhai MBBS fame, and his big forthcoming venture '3 Idiots', Bebo has shed off the western avatar from her previous hit 'Kambakht Ishq' to tranform into an everyday face on common streets - simple salwar suits, no overdone make up and even a pair of glasses!


3 Idiots, as the name may indicate, co-stars with Bebo three lead males- Aamir Khan, R. Madhvan and Sharman Joshi; Boman Irani remains yet another significant name on the cast. Expected to be released later in the year on Christmas Day, Hirani's film has been rumored to be a movie version of the extremely popular Chetan Bhagat best seller, 'Five Point Someone'. However both Bhagat and Hirani have denied the idea as such; Bhagat for his part, sources claim, did elaborate. The author clairified that the director took his book as the base of the movie however at the same time he also made changes accordingly. Bhagat also added the Hirani showed him the final script and he was quite happy with it.


With most part of the movie already shot- vital bits in the capital Delhi, other sequences in the extreme weather of Ladakh, and even some real location scenes at a hospital in Vashi which the director rented for a week. Furthermore, the music copyrights are being acquired by the famous T-series banner.


'3 Idiots' is a promising entertainer to look forward to!