View Profile
If everything goes to plan, Saif Ali Khan and Kareena Kapoor will soon tie knot!
Yes, you heard it right! 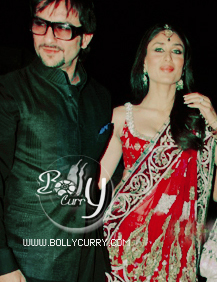 Kareena had earlier revealed on the latest season of Koffee with Karan that she wished to get married and that she and Saif have planned a date some time in the year of 2012. But it seems like the date may have been moved forward a little and the much awaited event might end up happening in 2011 itself.
This bit of delicious news has been revealed by none other than Saif's mom, Sharmila Tagore. Reportedly, Sharmila has said that the couple, who have been dating since the shooting for Tashan in 2007, are giving marriage a lot of thought and that Saif has even talked to his mother about the ordeal. According to Sharmila, the couple just have to decide on a date to set the pre-wedding festivities in place.
Both Saif and Kareena, who are also known as Saifeena, have been very open about their relationship, so much so that they have even discussed their wedding openly.
BollyCurry congratulates the couple and hopes to see them tie the knot soon!
Editor: Medha & Jenifer.
Graphics: Shikha.
12 Likes