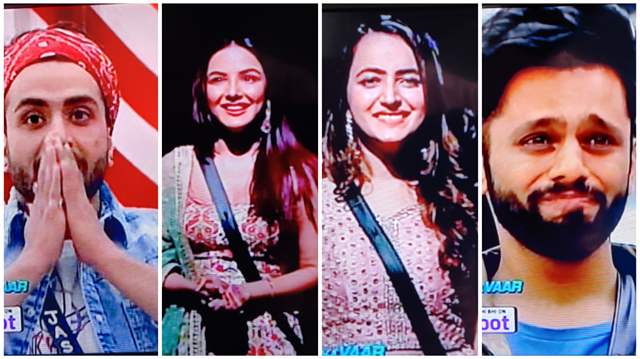 After probably what was one of the most explosive Weekend Ka Vaar episodes witnessing Salman Khan's wrath, the episode earlier today was rather mellow to say the least.

It did witness the surprise elimination of Arshi Khan but things continue to roll and people are moving on. Tomorrow will finally witness the mega episode of connections coming in the house and finally meeting their respective loved ones.

The precap showed how first former BB contestant Jasmin Bhasin is seen talking to Aly Goni through screen and telling him how much she loves him and furthermore telling Rahul Vaidya how she should have made him a priority. Later, we will see a wave of happiness pouring in as all contestants will meet their loved ones meaning immense happiness and all smiles.

But this is Bigg Boss and tone will change soon where Jyotika Dilaik will go on to try and explain it to sister Rubina Dilaik how she should behave like the one who has more senses in her spats and then also explaining Rakhi Sawant in her own right.

Later, Bhasin, who has been constantly vocal about her displeasure for Dilaik will be seen trying to explain Goni of the same but Goni will be adamant how he gets a great vibe from her and respects her a lot too. Bhasin will then taunt Goni that if he wins then might as well give the trophy to her.

Whatever it may be, this connection week might be the last bit of explosive entertainment the show needs to bow out of soon.