View Profile
Bollywood is a competitive world and to survive in it you need to be the fittest, the Best. Debuting this week is ‘Two Boys of One City’; Imran Khan and Harman Baweja. With their movies ready to hit the theatres in just two days, they both are ready for some serious action and thorough competition. 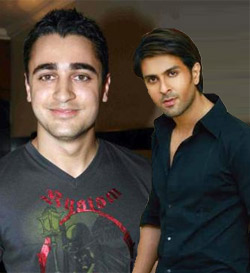 Featured Video
the while. But this time around he, too, is leaving no stone untouched for his nephew Imran’s debut film Jaane Tu… Ya Jaane Na. He’s promoting this movie big time by attending parties, conferencing with press, participating in reality shows and even inaugurating shops.

Aamir even agreed to become the first guest in item girl Rakhi Sawant’s show. Speaking about some serious rivalry, the actor even went ahead and out-threw Harman and instead, he and Imran became the guest for Salman’s Dus Ka Dum.

Harman, on the other hand, is not elbowing anyone but is concentrating on his movie’s promotion. His girlfriend (and also the leading lady in the film), Priyanka Chopra is with him to do the same for round the clock. They have been promoting their movie in Pantaloons, Fame and even have launched an all new Aura diamond collection labeled with the name of Love Story 2050.

While the Harman starrer is expecting a dawn of a new sci-fi world with the robots and the best animation the country has seen till now, the Imran starrer is based on the same age old concept of young generation trying to understand love and its reality. But not to forget Priyanka’s words that despite being a sci-fi film, Love Story 2050 is basically a love story.

Having both the love stories on each of our hands, now we all have to wait till the Friday dawn hits the theaters to see who between Harman and Imran battles well on the field of love game. Not to forget the game of currency at the BO!