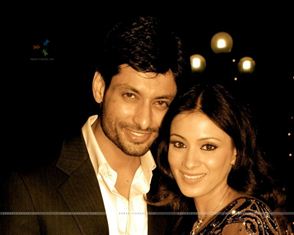 Their love story started when they were acting together in Rajshri Productions almost a decade back. Barkha Bisht Sengupta and Indraneel Sengupta met each other and fell in love while they were shooting for the Star Plus show Pyaar ke Do Naam - Ek Radha, Ek Shyaam. The couple were again seen together in Aroona Irani's Doli Saja Ke during which they got married and are now doing great in their individual careers.

While Indraneel has gone ahead to become a big star in Bengali films along with doing Hindi films, Barkha too went on to do work in Television and films. However, for a long time now they never got a chance to work as a couple in any other project. And the one to give them this chance again is Kavita Barjatya, their producer of Pyaar ke Do Naam - Ek Radha, Ek Shyaam.

Kavita who has turned into a film producer with her first film under the Rajshri banner Samrat and Company has got the duo to act together in the film once again as a couple. Telling us more about the role Barkha says excitedly, "Yes, we have worked together but this is the first time we are playing a couple in a film." Samrat and Company which is in the thriller category has another TV star Rajeev Khandelwal playing the main role of a detective. "The story revolves around a family where Indraneel plays the role of Vijay, younger brother to Priyanshu Chatterjee and I play Indraneel's wife Revati," Barkha elaborates.

The fact that they were being offered to act together and that too by the same producer who got them together was enough for the couple to give a nod to the project, says Barkha, "Honestly, my role is nothing much to talk about but Indraneel does have a layered character in Samrat and Company. He is a combination of a good and bad guy and his role is quite interesting. The moment we were approached for this project we just had to say 'yes' to it without even thinking."

Barkha fondly remembers the special bond that they share with the crew members some of whom were around since the shoot of their TV show, "We have had great relations with Rajshri Productions and it was great spending time with them again. While Kavitaji is the producer, Kaushik Ghatak who is the director of the film was director of our show too, even the Assistant Director and others in the crew were with us in the show so all the time in between shots we were this huge group who would talk about earlier days and had a gala time reminiscing memories about the show and all the good time we have had. We shot for almost 15 days in Mumbai and the experience was quite memorable."

The bonding sure is reflecting in the film and we wish Kavita Barjatya all the very best to her debut film venture!

angelic.pari 6 years ago wow yayy im so so so happy

love u rajeev barkha and neil

miss Kahiin to hoga and pyaar ke do naam

Sona_Chandini 6 years ago I loved them in Doli Saja Ke. I'm excited to see them act together again.

Mohabbateinn 6 years ago OMG Doli Saja Ke used to be one of the top show on Sahara ONe in its time... so excited to see Barkha and Indraneil together on screeen

soulstarspirit 6 years ago Love you Rajeev khandelwal... ! :* saw ur name..and thats enough to bring smile on my face.