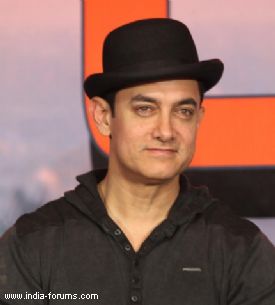 Bollywood actor-filmmaker Aamir Khan, who was recently in the Tamil Nadu capital for the opening ceremony of the 11th Chennai Film Festival (CIFF), took out some time to spend with veteran Tamil filmmaker K. Balachander, who wished him luck for his forthcoming release "Dhoom 3".

"It was a courtesy meeting. KB sir and Aamir chatted for about thirty minutes and recalled their last meeting at an awards ceremony in Chennai. He wished Aamir for the release of 'Dhoom 3' and also congratulated his work on the television show 'Satyamev Jayate'," Balachander's agent told IANS.

The duo had last met in 2008 at the Gollapudi Memorial Award ceremony here. That year, Aamir was presented the award for his directorial project "Taare Zameen Par" which dealt with dyslexia in children.

"Aamir kept talking about KB sir's speech at the Gollapudi Award ceremony. He had told him that he had had recorded that video and he keeps showing it to his friends in the industry," he added.

Sara Ali Khan heads to Mumbai as she receives summon from ...
24 minutes ago

Bigg Boss 14: First look of the shopping mall, theatre and ...
33 minutes ago

exclusive
Exclusive Ashnoor Kaur on music video with Millind: It is something ...
54 minutes ago