Indian football captain, Baichung Bhutia and his choreographer Sonia have lifted Sony's Jhalak Dikhhla Jaa 3 trophy. The lanky Sikkimese dude who initially had hiccups in getting his emotions right on stage beat the talented dancer Gauhar Khan and the crowd favorite Karan Singh Grover, in the finale which was recorded late last night and went on to become the First Male Winner of Jhalak!! 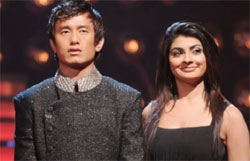 The Grand Finale will be telecasted next Sunday night. "Most finals are usually telecast deferred live, but this had to be delayed because tonight's IPL Finale was being aired live on the sister network of Sony", says a source.

Coming to yesterday's finale, Savio Barnes, choreographer of Hard Kaur told us, "The audiences SMS vote overturned the judges' markings which had favored Gauhar. They selected the second best Baichung as their winner and kept Karan Singh as the third finalist, just like the teen deviyaan".

"There was no face off round between the top two and the audience vote selected Baichung", confirms our source from the sets. Our khabru went on to state that when the top two names were announced, everybody was surprised because it was expected that Karan will get most votes.

Although Savio admitted that Gauhar was a better dancer, he felt "Baichung deserved to win as he had showed remarkable growth and had reached this stage from being a complete non-dancer. Gauhar on the other hand is a good dancer, and she had trained with me too in the past".

On Karan our source says, "There was no growth; he remained where he was right from round one".

Savio who was quite depressed at losing out in the semi finals felt much better when the channel and the jury gave him and Hard Kaur, the Best Dancers' trophy, a replica of the winning trophy, after telling them that this was not out of sympathy,  but because they deserved it.

Well, the moment of truth is that the Jhalak trophy belongs to Baichung!! Three cheers to the guy...

solly21 11 years ago OMg I am so happy that Baichung won,
Having sonia as his choreographer was the best thing ever, he was not only luckky to have sonia, but he IMPROVED TREMENDOUSLY every singel week.
cONGRATS BHAICHUNG WELL DESERVED, THANK GOD GAUHAR DID NOT WIN.

Ruhhee 11 years ago Congrats on winning everytime u have showed hard work and done justice to this show your dancing graph has been going up and up all the time and that''s what it is to take part in a dancing competition when you are a non dancer show that you can learned and prove yourself everyone who is a good dancer can dance and win but when a non dancer prove to be a dancer then that''s a deserving winner...the janta is always right...well done BB hope to see more and more shaking your legs i think sony tv should take the rights and make some good dance shows with you...looking forward to see soon on the screennnnn....

ARMAANJI 11 years ago hey..common u hav 2 admit dat bb is nt a deserving dancer...d show iz abt expressionz nd as well as dancing....
bb only wins jhalak cox of d judges nd their support...
nd dats true...
karan hz all d qualities....nd everything iz abt karan...
sooo dont bash a good dancer.....
karan gives such an extraordinary performances in jdj3....
d judges nd other ppl hv prblmz wth him only cox of hz popularity....
if ppl votes 4 hm dats only cox of hz hardwork nd great effort which he put through out hz performances.....

After Ten Months Jacqueline Fernandez has Finally Re-united ...
7 minutes ago

Kangana Slams Anushka for Raising her Voice Against ...
34 minutes ago

'RadhaKrishn' Fame Vaidehi Nair Roped in For 'Brahmarakshas ...
39 minutes ago