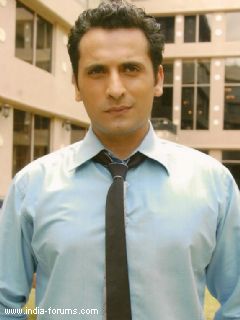 The curtains are down on Bade Acche Lagte Hai, which started as a unique mature love story of two distinct individuals, and looking back at the journey, actor Jai Kalra, who's now looking forward to Laut Aao Trisha, says it brought a whiff of freshness to the Indian TV industry.

The Ekta Kapoor show, starring Ram Kapoor and Sakshi Tanwar as the couple brought together by destiny and locked in a relationship of love, featured Jai as Vikram Shergill, Ram's closest friend, confidant and business associate.

After a successful run of over three years, the show, which explored how two different personalities accidentally discover love after they marry, came to an end just last week.

"The journey was amazing. We all developed a wonderful relationship with each other. The cast and crew of BALH is like my second family. It is sad that we have to move on now," Jai, who played a joyous and positive role in the show, told in an interview here.

The tall and handsome actor, who started out as a model in showbiz, believes BALH has not just played a vital role in shaping up his career but also in setting "new benchmarks in the TV industry".

"The show came when the industry was going through a very over-dramatic phase and needed some newness. BALH came with a subtle touch of freshness and set a new milestone in the industry. It was a one-of-a-kind show," he said.

Talking about how it was special for him, Jai said: "Well, I did a negative role in 'Kis Desh Mein Hai Meraa Dil' and after it, I was offered similar roles. I took up 'Bhaskar Bharti' as the script was interesting and unlike anything I had done before. When BALH happened, it was a chance to do something totally different and exciting. The character of Vikram has given me a lot."

He says he feels blessed with the co-actors he gets in all his shows.

"I have had a bunch of awesome co-stars all through my career. Be it Ram Kapoor and Sakshi Tanwar in BALH or Bhagyashree, Eijaz Khan and Rajeshwari Badola in Laut Aao Trisha," said Jai, whose new show goes on air on July 21.

The show promises to be an intriguing story full of tricky plots and deals with "in family crimes".

Without revealing much about his role, Jai said: "It's a positive one. When I read the script, I immediately agreed to it as I knew that I can do justice to the role."

Jai has also done his bit on the big screen with appearances in movies like "Page 3", "Shagird" and "Love U... Mr. Kalakaar!".

There have also been rumors that he has directed a TV show in the past.

Rubbishing it, he said: "I don't know who made up those rumors. I will want to try my hand at directing, but presently I am totally dedicated to acting. The plan for direction may take a couple of years to initiate."

sandhya2903 6 years ago Vikram and Neha are truly adorble. . And indeed BALH is the game changer on TV

PureDrivenSnow 6 years ago Can't wait to see you and Eijaz in the Laut Aao Trisha.

veena23 6 years ago All the best...hope we will see sakshi also in other show soon.

ILuvPrachiDesai 6 years ago Wish u all the best Jai. Waiting for Laut Ao Trisha.

luvsakshi 6 years ago I totally agree with You jai ...
BALH has made a "Ne bench mark in Tv industry " and again there wont be any show like this ..

BALH will stay ever in our hearts ..
all the bestfor your new show