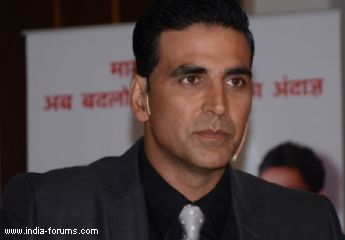 Akshay Kumar is shooting the climax of his forthcoming film "Rowdy Rathore" at Badami village and says he will miss the place once the shoot gets over.

"Who would have thought that I'd be sad to see the back of Badami Village near Hubli where 'Rowdy Rathore' action has taken place. After 30 days of raw hard work, I don't know what I'm gonna miss more, the caves or the friendly frogs I would wake up with every morning! Must say its been a schedule to remember," the 44-year-old posted on Twitter.

The last time a Hindi film was shot in Badami, in Bagalkot district of Karnataka, was Mani Ratnam's "Guru".

"Rowdy Rathore", directed by Prabhu Deva, has Sonakshi Sinha in the female lead.

Co-produced by Sanjay Leela Bhansali, UTV Motion Pictures and Hari Om Productions, the film is a remake of the superhit Telugu film "Vikramarkudu", which was also remade in Tamil as "Siruthai".

"We would play cricket each and every night without fail, from stunt men to assistant directors, wardrobe team, not to mention my producers and our infamously beloved bowler/dancer/director Prabhu Deva. Its been a legendary experience... all I can pray for is it becomes a legendary film and that my friends is all down to you now, I have given my best I hope you enjoy it," he added.

The film is set for June 15 release.

After her seductive dance moves as "Chikni Chameli" in the movie "Agneepath", actress Katrina Kaif is working 24x7 for her Slice commercial.

The 27-year-old recently shot for the Slice campaign at an undisclosed location in Thailand where she not only performed some under water shots but also worked for more then 14 hours to finish the shoot.

"Katrina is a thorough professional and hard work doesn't scare her. The new Slice ad required her to shoot extensively under water and it is quite tiring. She wrapped up two days' work in a day and everyone was impressed with her comfort in water," said a source in a statement.

Actor Neil Nitin Mukesh initially enjoyed filming romantic thriller "Shortcut Romeo" in the jungles of Kenya, but now says that shooting an action sequence there was a tough job.

The film is being shot in Masai Mara, a large game reserve in south-western Kenya.

"Had an action sequence in the jungles! And we had to crawl! I had a hundred thorns in my hand. Just wonder how the animals don't get pricked," the 30-year-old posted on tweeter.

"Shortcut Romeo" is being directed and produced by Susi Ganeshan and it is a remake of his 2006 Tamil film "Thiruttu Payale". In the film, Puja Gupta plays Neil's love interest, while Ameesha has been cast in a negative role.

Neil, who was last seen in multi-starrer movie "Players", left for Kenya Jan 26.

"Ok so we had to scoot back into our safari vehicles because a group of 10 lionesses have gotten out to hunt antelopes. The pain of the thorn pricks just vanished seeing this," he further tweeted.

He is not only playing the lead role in the movie, but will also give voice to one of the songs. This is not the first time that Neil has turned singer. He had previously sung the title track for "Aa Dekhen Zara" and later gave his voice to a song in "Jail".

Tiger Shroff shares his experience on receiving ...
35 minutes ago