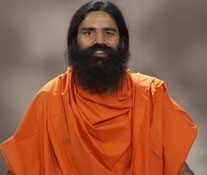 Going by the trend that COLORS and Endemol set last year in roping in contestants from all walks of life for their show Bigg Boss, we believe that the same will be followed this year too!!

Well, the buzz is that the renowned Baba Ramdev, who is particularly well-known for his efforts in popularizing Yoga has been approached to be part of the show.

According to our source, "Talks are on with Baba, and it looks as though he will most likely be one of the inmates in the show".

Baba Ramdev is a person who has always been in the news for his comments, whether it be for his opinions on legal issues, exploitation of farmers, his take on Indian black money in Swiss banks, and above all on the glam dolls of our industry.

For the uninitiated, Big B has been roped in as the host for Season 3.

13 years ago All the housemates will learn yoga...good foe them...

+ 4
13 years ago Renowned Saint?? When did baba ramdev become a saint?? Lol... Now will we have such baba's and yoga experts being called saints! Quite a silly thing to say... As for Ramdev in big boss, I think it itself speaks of what kind of a baba or saint he is lol...

13 years ago bit weird.. he always wants to be in news.. he is good in his field and he should stick to that only..

+ 2
13 years ago actually, this would be really funny to see! i want him to go on there...lolll

I thought Baba Ramdev preached about leaving all luxuries of life ?!

+ 3
13 years ago does anyone know when BB3 is starting?? This if true makes it interesting