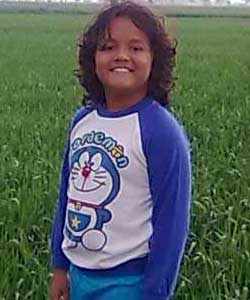 Sony TV's Adaalat, as we told you is coming up with a few surprises, with the introduction of Romit Raj and Shweta Kawatra. The list of new entries does not end here, and we will soon see a little kid creating havoc in K.D. Pathak's (Ronit Roy) life.

Yes, you heard it right! The super lawyer will be bullied by an intelligent and naughty kid, to be played by Azaan Rustam Shah.

A little birdie tells us, "Azaan Shah will essay the role of Bunty, who is K.D.'s neighbor. The mention of the kid has already been aired in last week's episode where Jhilmil (Mushtaq Khan) is hell bent in solving a puzzle given to him by a kid. Bunty will make. K.D.'s life hell and will throw various puzzles at him. The lawyer will be made to sweat out a bit to get answers to the puzzle".

TellyBuzz has already reported about Divyanka Tripathi being part of an episode. Bunty's entry will be aired in this particular episode where he brings the case of the lady to K.D., as he is a friend of the lady's kid.

We hear that Azaan Shah starts his shoot from today, and will go on to be an integral part of the show. The child artist is presently seen in Sony's Bade Acche Laggte Hai also.

xxMATSxx 9 years ago balh rocks!!! Love the show! i dont see this kid very much in the show anyways... adalatt is also good..hope to catch him in adalaat

adutta94 9 years ago wow!! sounds interesting. love this show. it gets better and better. nothing to say about it. simply hats off to all the casts of adaalat. simply fabulous. i never used to like Ronit Roy bt after this show i'm his biggest fan of all n this kid's entry will make this show even more fun n entetraining to watch. i'm sooo excited to watch it now. it will be really funny. can't wait to see it. looking forward to the episode

-Nirvana- 9 years ago Hey I remember u from shree...sweet boy gud luck ;)

-Preeti- 9 years ago he's a real talented Kid ... wish him all the very best

shamma92 9 years ago Thanks for the article, good luck K.D and all the best for Azaan! :)

wadi..doll 9 years ago luv this boy he is really cute and sweet yaar

Wistfulness 9 years ago KD sir will have to struggle now. This guy was mentioned as he puzzled Jhilmil.

Priyanka Chopra praises Sonu Sood as UNDP confers him with ...
10 minutes ago